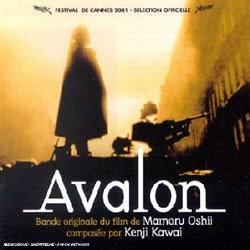 Parels:
Log off
Voyage to Avalon
Nine Sisters
Gray Lady (Ash)
Voyage to Avalon (Orchestra version)
Log in
Avalon - 06/10 - Review of Andreas Lindahl, submitted at 2008-01-20 21:25:40 (English)
Avalon, directed by Mamoru Oshii, tells the story of Ash, who lives in a dark future were computer games have become addictive and deadly. One of these games is called Avalon. Kenji Kawai, who has written music for a large number of Japanese films, such as Ringu, has delivered a dark, mysterious and at times quite beautiful score. Kawai mixes orchestral music with synths and a full size choir and the result is an impressive score, which unfortunately only has been released on CD in Japan.

"Log Off" is a rather good choral piece, which features a large choir, supported by brass, synths and percussion. "Voyage to AVALON" is a four minute piece performed by soprano and strings. Very operatic and classical with hints of New Age. Very lovely. It sets the tone for much of the score with its slow string lines. "Nine Sisters", however, features some rather cheesy writing for a synth choir. Very rytmic and a little reminiscent of something that perhaps Philip Glass would come up with. Almost minimalistic with its repeated eight note figures. But not that good. Good, however, is the absolutely wonderful "Gray Lady (Ash)". Almost five minutes long this is an absolutely beautiful piece performed by strings. Very soothing and relaxing. And the theme is top notch. Simple, but memorable. And so sad. It shows up a couple of more times, such as in the almost equally beautiful "Tir na mBan". These two cues are the higlight of the entire score.