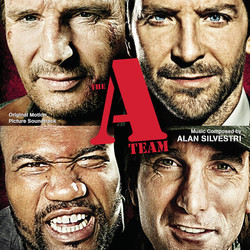 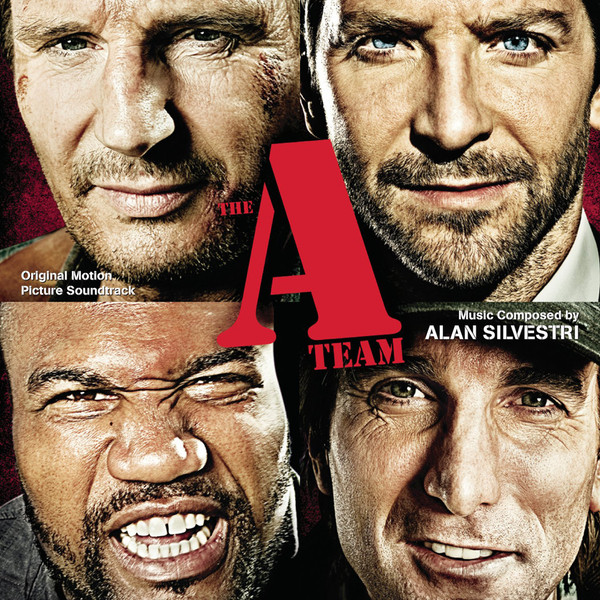 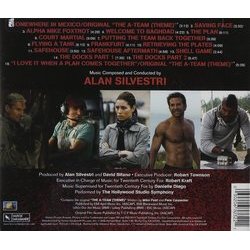 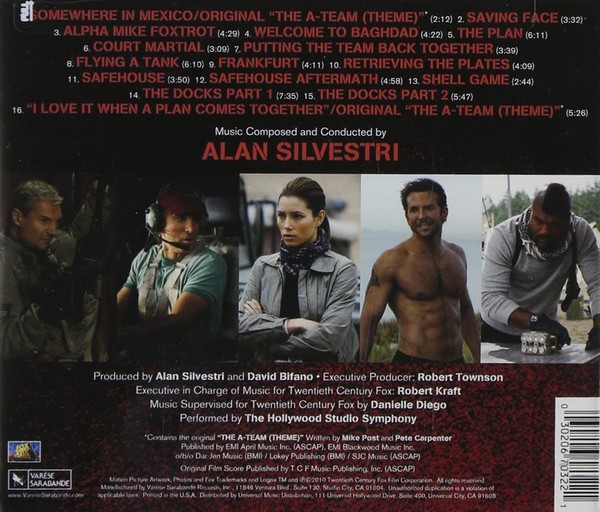 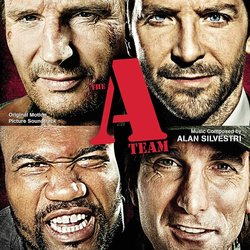 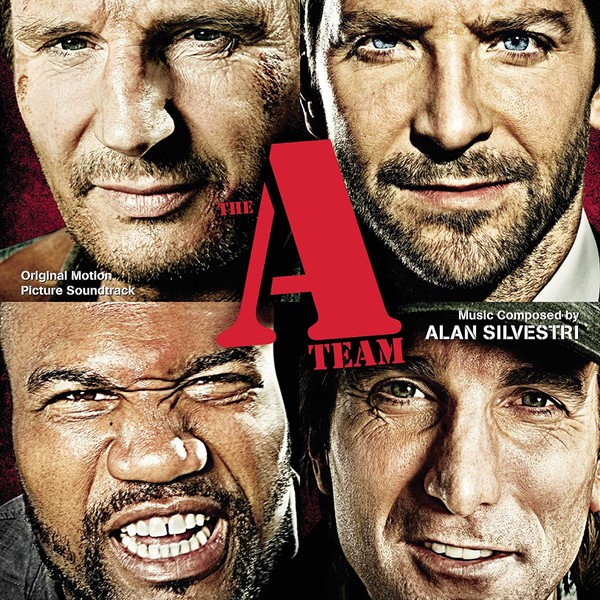 Show reviews in other languages
The A-Team - 07/10 - Review of Edmund Meinerts, submitted at 2010-10-05 18:25:08 en
The 2010 film adaptation of The A-Team is yet another entry in a rapidly lengthening list of summer action blockbusters that seek to cash in on the extremely popular wave of 80s nostalgia that has swept popular culture in the last few years or so. It resembles previous entries on that list  Transformers, Transformers: Revenge of the Fallen, G.I. Joe: The Rise of Cobra, Predators and most recently The Expendables  in that it has been critically bashed yet financially quite successful. No stranger to this wave is veteran action composer Alan Silvestri (though its rather ironic that he also gave the 80s themselves two iconic scores, Back to the Future and Predator ). Silvestri gave G.I. Joe: The Rise of Cobra a serviceable, yet almost frighteningly bland score the previous summer. Having found themselves yet again in the position of hearing Silvestri score wall-to-wall 80s-throwback action, the composers fans, naturally, crossed their fingers that The A-Team would return to the more memorable orchestral bombast of The Mummy Returns and Van Helsing rather than resurrect G.I. Joes irritating drum loops and weak thematic development. Were their prayers heard?

Partially. However, the reality does need to be faced: The A-Team and G.I. Joe are very consistent with each other in terms of style. Both rely heavily on synthetic drum loops, aiding a full orchestra (but no choir) to create an enormous volume of sonic wallpaper. Silvestris integration of electronics has ranged from pretty good ( Lara Croft Tomb Raider: The Cradle of Life ) to almost intolerable (the aforemetioned G.I. Joe), never achieving the easy, skillful balance that John Powell and Brian Tyler seemingly achieve in their sleep. The A-Team resides somewhere in between Cradle of Life and G.I. Joe, with some of the synthetic additions doing an OK job of adding to the action music (the cue Alpha Mike Foxtrot is a decent example and one of the albums better cues) and some of them major annoyances (2:42 into Frankfurt is particularly horrendous).

There is one instance, however, where Silvestri drops the electronics entirely and relies purely on the symphonic weight of his bombastic brass, chopping strings and militaristic percussion alone; that cue is the six-minute centrepiece Flying a Tank, an instant candidate for action cue of the year and probably Silvestris best writing in that venue since Van Helsing. So significant is the difference in quality, excitement level and orchestration between Flying a Tank and the rest of the music that it sounds almost like an extract from an entirely different (and superior) score. It proves once and for all that Silvestri is at his best when he leaves the synths at home and stretches his orchestral muscles  which are among the most powerful in Hollywood.

One of G.I. Joes major flaws was the lack of thematic transparency; its theme was highly pedestrian and didnt even make much of an appearance to speak of until the albums second half. The A-Team improves on that slightly, with a fairly enjoyable heroic theme and a few other recurring progressions binding it together into a relatively coherent whole (though it certainly doesnt throw oodles of memorable motifs at you the way Van Helsing did). The heroic theme is divided into two parts; a fanfare for brass, and a more fluid, harmonious second part for strings. The action music is peppered by the fanfare throughout the score; the second part makes fewer appearances (increasing its impact when it does turn up, as at the end of Flying a Tank). Both are fairly standard Silvestri fare, with the second part containing some familiar progressions reminiscent of Beowulf. Also recalling that 2007 score is 'Court Martial', one of the score's few non-action cues, a general collection of simplistic, but harmonically pleasing ideas that concludes with cymbal-crashing grandeur - though without Silvestri's usual choral accompaniment for such moments, it loses some of its weight.

Of interest to the 80s-nostalgics is whether Silvestri integrated Mike Post and Pete Carpenters catchy theme from the original TV show into his score at all. Indeed, he does, but its use is very limited. The ripping snare at the end of the otherwise utterly nondescript first track echoes it, as do a quick reference at 3:24 of The Plan and at the end of the first 'Docks' cue, but it isnt until the end of the final cue that an enthusiastically reorchestrated, snare-heavy rendition appears. The sparing use of the theme makes its appearances rather awkward, especially the final one; its upbeat major-key progressions are out of place compared to the (faux-)dramatics that dominate the rest of the score. Had Silvestri either adapted the theme as the central identity of his score or ignored it entirely (the latter would probably have invoked the ire of the movies target audience, though), the album would have probably flowed more smoothly.

The biggest issue with this album, though, is more to do with its excessive length, a weakness that The A-Team yet again shares with G.I. Joe. Far too much of this score consists of little more than extended sequences of looped synthetic rhythms, and upwards of twenty minutes could easily be removed without shedding any salt tears. Also, if the two Docks cues are intended as the final setpiece, Silvestri truly failed to summon up any real sense of urgency; the action music here stutters and is plagued by stops and starts; it's plenty loud, but as Shakespeare said, that doesn't signify anything.

All in all, the most significant difference between The A-Team and G.I. Joe is Flying a Tank'. It seems almost as though Silvestri chose a single action setpiece and put a lot of effort into scoring it, then decided to freewheel for the rest of the score. Without that cue, this would, like G.I. Joe, be a six-out-of-ten effort; enjoyable at times, saturated with soothingly familiar Silvestrisms (such as the determined string rhythm in The Plan and Putting the Team Back Together), certainly adequate for the film, but ultimately forgettable. Flying a Tank just manages to nudge that rating up - a rating that, as always, reflects enjoyability; from an intellectual standpoint, this score probably deserves less. What The A-Team does do is show that when he gives his all, Silvestri is still one of the best action composers working today. Whether one really strong cue among myriad average ones merits a purchase ultimately depends on how much you enjoy the composers action music, especially for modern technological settings. Even Silvestris most ardent fans will not be able to shake off the faint, but persistent scent of laziness that hovers around this product. Not too shabby, Al, but we all know you can do much better.
The A-Team - 04/10 - Review of Anthony Aguilar, submitted at 2011-11-19 10:33:41 en
Based upon a popular classic television series, The A-Team is a completely preposterous, ridiculous film that still somehow manages to be completely awesome. It has divided critics right down the middle for understandable reasons. This is a film into which a person can venture and do one of two things: 1) switch on his/her critical mind and realize just what a preposterous, stupid, unrealistic film it is, or 2) sit back and enjoy just how ridiculously awesome it is. The A-Team is near-perfect escapist entertainment. What certain people and directors realize is that many moviegoers attend films in order to escape reality for a couple of hours. The A-Team is for those people. While the film is awesome on a purely visceral level, the same can not be said of the sadly by-the-numbers score by Alan Silvestri.

I hate to say it, but Silvestri seems to have fallen into a repeating rut of providing merely functional music for sub-par films. The A-Team is the latest score to take the functional-but-nothing-more route. Varese Sarabande has provided us with an overly-generous 72-minutes of music. At least 15 minutes could have been shaved from this album to make it more enjoyable. As it stands, what we have here is an overlong album for a score which lacks a distinct, memorable thematic identity. This is not to say that the score is themeless. Silvestri has concocted a theme of his own for the team which is usually heard in moments of intense action. It is an heroic, militaristic, simplistic, but incredibly slight theme which doesnt stick in ones memory for long after the first couple of listens. It does its job well enough, but cannot sustain a monothematic score over the course of 72 minutes. Listening to this album all of the way through is more of a chore than a joy.

That said, the score does have its moments of the thrilling action we all know Silvestri is capable of providing. Saving Face makes good use of the main theme over some thrillingly punchy brass hits. Also, one of the best set-pieces in the film also makes for one of the best tracks on this album. Flying a Tank is an absolutely thrilling action piece which seems to have a brass theme of its own. Another moment which deserves mention is Silvestris spectacular recording of the original A-Team theme at the end of the album. Its sadly out-of-place, but is a breath of fresh air after the 70-minutes music which has come before and is a great way to end the album.

I cannot help but think about what such a missed opportunity this was for Silvestri. Here he had a chance to give this team a thematic identity and have a great deal of fun with it, but instead it seems as if he just switched himself onto autopilot once again. He could have even worked in a love theme, but passed that opportunity up as well. This is by-the-numbers music that I can only recommend for die-hard fans of the composer. Fans of the original series need only download the final track on the album, because the original theme is nowhere else quoted in full. If you have $10 to spare and are a die-hard fan of Silvestri, then this album may be worth a digital download purchase from you, but I wouldnt pay more than that for the CD.
Original Motion Picture Soundtrack
Music Composed by Alan Silvestri
(G.I. Joe: The Rise Of Cobra, Night At The Museum)

The high-octane adrenaline-fueled score is by Alan Silvestri (Night At The Museum).
Trailer: