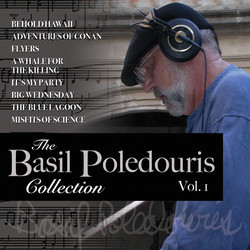 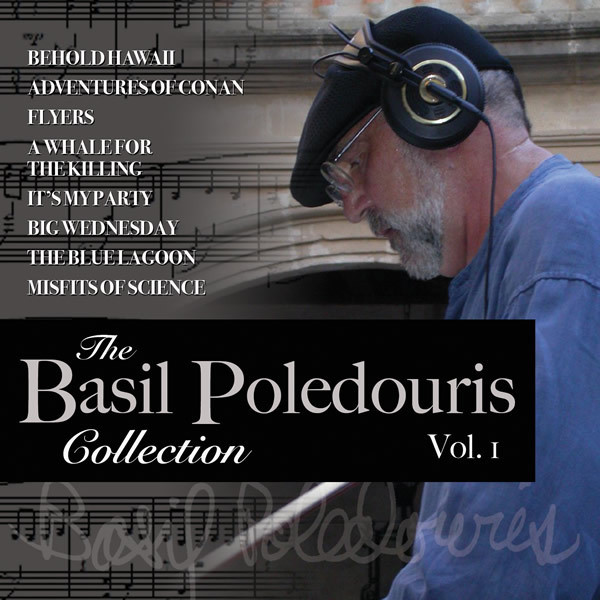 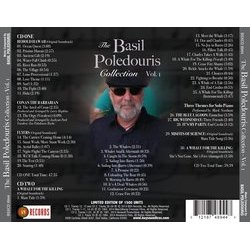 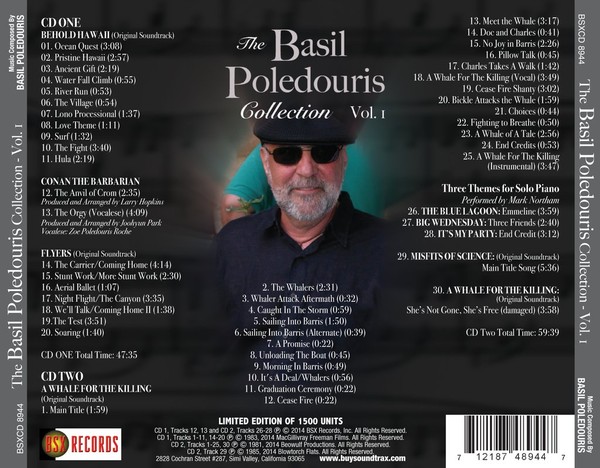 BSX Records presents THE BASIL POLEDOURIS COLLECTION, VOL. 1, featuring music composed by the great Basil Poledouris. For this special 2 CD collection of rarities, BSX Records showcases a blend of extended original soundtrack presentations of some of the composers lesser-available works along with a selection of newly-recorded interpretations of his more popular scores. THE BASIL POLEDOURIS COLLECTION, VOL. 1 includes never-before-released music from the IMAX films BEHOLD HAWAII, and FLYERS, a complete presentation of the score to A WHALE FOR THE KILLING, along with new recordings of music from CONAN THE BARBARIAN, BIG WEDNESDAY, THE BLUE LAGOON and ITS MY PARTY and, finally, a rare demo produced by the composer for the television show MISFITS OF SCIENCE.

Released in 1983, BEHOLD HAWAII is a magnificently photographed visual exploration of the Hawaiian Islands wrapped around an adventure story of a Hawaiian familys cultural experiences over a dozen centuries. Produced and directed by MacGillivray/Freeman films, BEHOLD HAWAII mixed scientific accuracy with a fictional story to draw viewers into this far-reaching story about Hawaiis cultural history. Performed with a small acoustic ensemble sweetened with synth overlays, the films visual splendors evoke a particularly compelling score rich in elegant recurring melodies and exotic instrumental textures.

Composed the same year as BEHOLD HAWAII, FLYERS is a 35-minute IMAX short film. Unlike the scenic documentaries that formed most of the early IMAX films, FLYERS was a fictional drama about a group of stunt pilots who are making a movie. This dramatic narrative engaged the audience with the characters, while the story afforded plenty of spectacular aerial photography of classic aircraft in flight. All of these allowed Basil to compose some thrilling aerobatic music, from soaring crescendos to tense, perilous action riffs, and even a bit of old fashioned carnival music. A poignant romantic theme underscores the family relationship at the heart of the stunt pilot team. FLYERS is presented on this release newly remastered.

Based on the 1972 book by Canadian conservationist Farley Mowat, the 1981 made-for-TV film, A WHALE FOR THE KILLING tells the story of Charles Landon (Peter Strauss), an ecologist from New York who finds himself stranded in a small village in Newfoundland with his family after a storm has blown them off course. When a humpback whale is discovered stranded by the same storm in the towns lagoon, Charles sets out to save the whales life from some of the local townspeople, who have their own plans for the whale. Released previously by BSX Records as a presentation of eleven tracks chosen by the composer for promotional purposes, A WHALE FOR THE KILLING is presented on this release in its entirety for the first time, including the song featured in the film. When it came time to assemble the music for this album, only the orchestral backing track was located  the vocal track was missing. Rather than pull the original vocal from the movie track, in order to gain a better sound quality weve elected to record a new vocal, produced by our frequent collaborator Dominik Hauser, and overlay that on top of Basils orchestral underscore, thus recreating the song in the manner it was heard in the film.

MISFITS OF SCIENCE was a single season TV series that ran from October 1985 through February 1986 on NBC, focusing on the exploits of a team of misfit teens with extraordinary abilities who fight crime for a scientific think tank. Basil scored the shows 2-hour pilot and first two hour-long episodes. For the shows theme, the producers were looking for a pop-rock song in what was then Madonnas style; this track is the first demo that Basil produced and submitted, with lyrics by Steve Schiff, sung by Karen Lawrence. This is the first time the original demo recording has been released.

Basil Poledouris was born on August 21, 1945 in Kansas City. He started taking piano lessons when he was 7 years old. Eventually, he went on to become a student at USC, where he studied directing, cinematography, editing, sound and music. In over two decades of scoring motion pictures, he has proven himself a master of melody and emotional power, forging rewarding creative relationships with directors such as Paul Verhoeven, John Milius, Randal Kleiser, Simon Wincer and John Waters. Basil has composed music for films such as BIG WEDNESDAY, THE BLUE LAGOON, CONAN THE BARBARIAN, RED DAWN, ROBOCOP, FLESH AND BLOOD, QUIGLEY DOWN UNDER, THE HUNT FOR RED OCTOBER, LES MISERABLES, STARSHIP TROOPERS and FOR LOVE OF THE GAME. For television, he composed music for the epic miniseries AMERIKA and LONESOME DOVE, for which he won an Emmy in 1989.

THE BASIL POLEDOURIS COLLECTION, VOL. 1 is a limited edition release of 2000 units