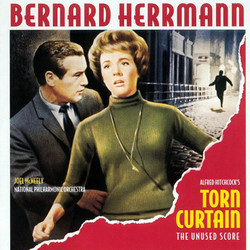 Torn Curtain - 07/10 - Review of Tom Daish, submitted at 2010-09-07 21:55:25
The lot of the replacement score composer is not, I imagine, a happy one, especially when you're following in the footsteps of one of film music's finest practitioners, Bernard Herrmann and stepping after the acrimonious break down of his most important working relationship, that with Alfred Hitchcock. Although not perhaps an A-list composer, John Addison still has plenty of fine credits, more often than not for British films, to his name and will always have a place in my collection for his wonderful theme to Murder, She Wrote. Although the studio rejected Herrmann's score in favour of something more commercial, Addison's score is still some way from the kind of John Barry swagger they were probably hoping for. After all, Hitchcock was trying to make a film more 'realistic' than the glossy Bonds and anything too glamorous would have run against the film's overall tone.
Unlike the presentation of Herrmann's rejected score on Varese's recording, the album for Addison's score is more of a spin off pops album, highlighting the big themes, with less emphasis on the actual underscore. However, it does ensure an album that is unfailingly engaging, although at under half an hour, it really ought not to lose steam. The opening two tracks introduce the main themes; the main theme is a more stylish sax melody than Herrmann's crushing brass titles, coming across as rather more stylized and less threatening. It does rather bring to mind Poirot or Agatha Christie type mysteries than a cold war thriller, but it is still a fine melody and hugely memorable. The Love Theme ('from Torn Curtain,' as the track listings repeatedly note) is almost a light waltz variation of the main theme and thus both complimentary and contrasting. Most of the cues are variations on these melodies, but some passages break away, notably the exciting pi (as in 3.142 - no, I don't know why) Bus Theme Variations and The Murder of Gromek. The latter bears comparison with Herrmann's take on the same scene and while Addison never reaches the same level of barbarity, the writing is effectively aggressive.

After the exciting Escape on the pi Bus, the End Title breaks out into a fine 60's cheese fest as the Johnny Mann Singers provide a vocal version of the Love Theme; it certainly seems an extremely un-Hitchcockian way to conclude and I shudder to imagine would Herrmann would have thought. Indeed, the emphasis on the love theme (undoubtedly as a result of the commercial imperative for the soundtrack album) probably makes Addison's score appear more disposable than it actually is. I rather suspect there is a wealth of dramatic material left to release and while the brief notes on the film and score by Kevin Mulhall don't say, one suspects this is a straight re-release of the original LP and it seems entirely likely that it's a re-recording for album release. That the sound quality is notably fine for a 1966 recording further suggests this might be the case. Far from an also-ran, Addison's score is a fine compliment and interesting alternate to Herrmann's with plenty to recommend it.