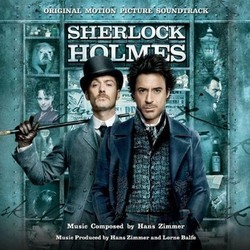 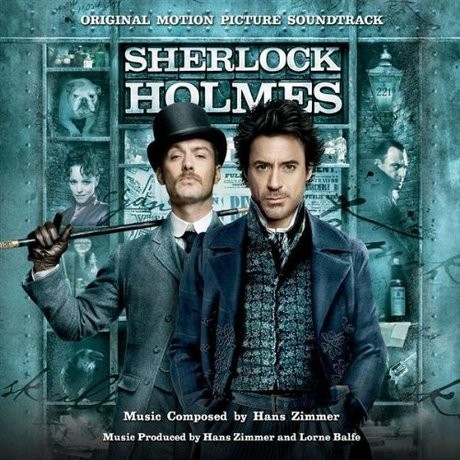 Show reviews in other languages
Sherlock Holmes - 08/10 - Review of Edmund Meinerts, submitted at 2010-02-06 10:21:13
Before I tackle this baby, I'd ask visitors of this site to ignore the fanboyish review written below - it's just a bit ridiculous and by no means objective. Now, when it comes to my favorite composer Hans Zimmer, I'm not usually much better - see my review for Pirates of the Caribbean: At World's End - but I at least try to bring in a bit of objectivity. Which doesn't stop this score being a fine Zimmer entry that combines his tried-and-true action stylistics with some playful, colorfully-instrumentated swing right out of An Everlasting Piece (by way of the Jack Sparrow music from Pirates of the Caribbean).

This is on display from track one, "Discombobulate", which instantly introduces us to the album's main (and only obvious) theme. Sure, Zimmer's usual chopping ostinatos provide the backing, but the theme itself is jauntily and un-MVishly performed on a range of instruments from zither via violin to accordeon, an upbeat continuation of "Multiple Jacks" from At World's End. The theme itself is Zimmer's most memorable composition since, umm, the Joker theme in The Dark Knight. But don't worry, this theme is MUCH, much more fun to listen to.

The bizarre instrumentations are what lifts this score above a more run-of-the-mill Zimmer action effort (The Dark Knight). Zimmer wanted to capture the feel of London's East End - he accomplished this by adding a variety of ethnic, almost Gypsy-like instruments, an accordeon, a detuned honky-tonk-like piano (rumor has it that Zimmer personally threw the piano down the stairs at his studio in order to achieve a suitably "battered" sound) and, most prominently, a solo violin, which is of course Sherlock Holmes' own instrument, though the performances on the album are thankfully more professional than the detective's own.

This wacky, off-kilter mood guides the score for much of its beginning. Only in "My Mind Rebels at Stagnation" do horns finally enter the fray, and even then only as a cameo in the background, providing a few warm chords over the jaunty rhythm. The end of this track is a sudden change of pace, turning into a neo-classical, melodramatic elegy the likes of which only Zimmer can compose. Over the top, the solo violin performs a repeating four-note motif that stands next to the main theme as pretty much the only discernible repeating idea in the entire score (it crops up again as an ostinato in "He's Killed the Dog Again" and "Panic, Shear Bloody Panic" among others)

Of course, when buying a Zimmer score, the real question is where does the action start up. Well, we get a hint of it in "He's Killed the Dog Again", which has a bass-heavy statement of the main theme at 1:50 that sounds almost like an electric guitar. But where the Zimmer-pounding really starts off is in "Marital Sabotage", a humdinger of an action track, with the main theme being blasted out (still on zither!) over an extremely bass-heavy growling string section. Delightfully, the action music always keeps its tongue in its cheek, either with the off-kilter instrumentation or Zimmer's monumentally deep bass section, which is even more faux-apocalyptic in the action scenes than usual.

The score's highlight is the first ten or so minutes of "Psychological Recovery...6 months", an eighteen-minute behemoth of a piece that throws together everything Zimmer's assembled for this score - the violin, the off-kilter instrumentations, the tongue-in-cheek action with fat basses and, of course, plenty of the main theme. As a lesser action motif, Zimmer takes the Westminster Chimes melody (the one Big Ben makes), and turns it into a colossal minor-key bassline (at 4:12, 9:30, 10:35 and especially 8:30, the latter of which is probably my favorite moment of the entire score). There's even a little hint of Irish personality at 3:35, in which a Uillean pipe enters the fray. Unlike with James Horner scores, in which the nasal instrument shows off its irritating qualities right up front and in your face, the pipe here provides a more pleasant background accompaniment.

"Psychological Recovery...6 months" ends on a subdued note, with the violin providing some quite beautiful performances (no, it isn't Joshua Bell this time...). In "Catatonie", the final track, though, Zimmer doesn't let us forget that this film is as much comedy as it is action - the off-kilterness of the score is all-pervading, even into the most apocalyptic of action scenes.

This score is a continuation of the upwards trend Zimmer has been showing since The Da Vinci Code in 2006. It's a surprisingly intelligent action score with a unique personality of its own that, to my immense surprise, garnered an Academy Award nomination (Zimmer's first since Gladiator ten years earlier). It's not quite as immensely entertaining as Angels & Demons was earlier this year and doesn't have a singular, awesome track (160 BPM), but this score should prove to Zimmer critics that he can and does sometimes leave his comfort zone and experiment with interesting instrumentations and wacky, off-kilter comedy even in his action scores. Though the ethnic instruments do sometimes intrude on the listening experience, this is still a superior score that should have something for more than just Hans Zimmer fans.
Sherlock Holmes - 10/10 - Review of The Hakar-G Padayachee, submitted at 2010-01-27 16:37:25
If my life was to be made into a film, it will be composed by Hans Zimmer. The maestro behind the great series of Pirates of the Caribbean, Christopher Nolan's fantastic reboot Batman series and the classics like Gladiator, Rain Man and The Last Samurai. Now in his recent attempt on the Sherlock Holmes film directed by Guy Ritchie, Hans Zimmer has pulled it off again and has graced our ears with authentic, unique music which can mesmerize the ears of open-minded people.

In fact the reason why Hans was even chosen for the job was that Guy Ritchie had used The Dark Knight score for the film. It felt hollow and incomplete without an epic score. Hans Zimmer was impressed with Guy Ritchie's taste in score music, as Hans Zimmer has always rated his Dark Knight theme as his best efforts.

Paying tributes to The Pogue of Roman a group who would create Turkish styled music, he brought Louis Beroe( forgive for the bad spelling) and created his greatest score yet.

A few fans may recognize the drunken music of Jack Sparrow but in the end, his score is purely classic.