The Omen
The deluxe edition 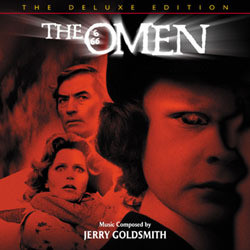 Show reviews in other languages
The Omen - 10/10 - Review of Tom Daish, submitted at 2010-09-13 20:17:06
If ever there was a film that was made by its score, the The Omen is one such film. So many of the scenes simply would not have worked had Goldsmith not injected them with such visceral terror. One scene in particular, when Patrick Troughton's character is running through a church yard is completely carried on the strength of the music. Nothing about the direction or acting particularly suggests a great deal of terror, but with Goldsmith's aptly titled cue, Killer Storm, the true menace of the situation is all too evident. The Omen was of course Goldsmith's only Oscar win to date and the fact that it won seems hardly credible now, not because it was a bad choice, simply that a horror film about the son of Satan isn't really Oscar friendly material. However, it could scarcely have been a better choice and ironically the year before John Williams was honoured for Jaws, another score that had to suggest much of the menace of the film, even if Spielberg's film is a considerably better achievement on its own terms.
The opening Ave Satani is probably the first of the Film Music Choral Music, therefore must be a rip-off Carmina Burana line. Of course Jerry Goldsmith (and most of the other composers accused) are much better than to rip-off such a well known piece of music. Ave Satani is, apart from anything, a much darker piece of music and is certainly much less percussive and violent, it is incredibly evil and a genuinely chilling piece of music. Hints of this appear at various points in the score until it is reprised at greater length in the final track. The New Ambassador introduces the love theme, which is really quite lovely and the perfect counterbalance to the more horrific aspects of the score. This Deluxe Edition orders the music chronologically as it appears in the film so the opening few cues feature the love theme more often, interlaced with more subdued suspense and only at Broken Vows does Goldsmith's bracing choral writing.

Most of the new cues are more supenseful or the love theme, but add give the entire score more depth than the original album. Of course it's those stand out demonic action cues that really stick in the mind. They almost always feature the choir and not only do they sing, but also chant and cheer their way behind the orchestra, while occasionally whispering, which above a grumbling orchestra does nothing for the nerves, an inspired idea indeed. The Demise of Mrs Baylock is possibly the finest, horrific cue of the album where all the above ideas, together with a Stravinsky-like chopping string ostinato, keep the nerves on end. However, the Dog's Attack as well as Killer's Storm are both very horrifying in their own right, but never become unlistenable. The Altar replays much of Ave Satani and brings the album to a chilling close.

Unlike the original album, The Piper Dreams - the song based on the love theme and sung by Goldsmith's wife, Carol - is thoughtfully placed at the end and the remastering makes it a considerably better listen. The Omen is a must buy for Goldsmith fans, although I suspect that some with stronger religious beliefs than myself might shy away from buying the score. However, it is still a classic score and Varese's new edition features cleaner sound and excellent liner notes. It's not absolutely complete, but the remaining few cues don't add much extra to what is contained here. It won Goldsmith his first and so far, only Oscar, which is unusual given the nature of the score and the film, although in this case it was only given for quality and a monumental achievement.
Oscars: Best Original Score (Winner)