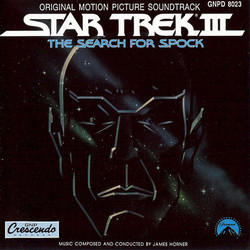 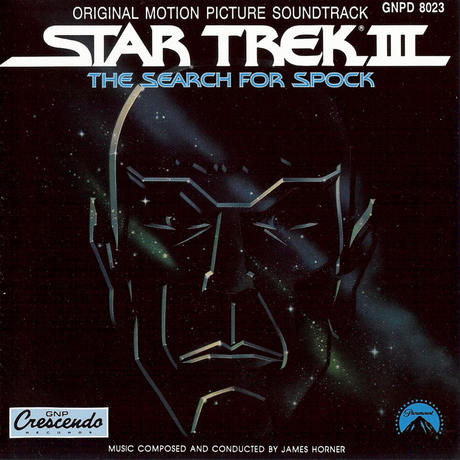 Show reviews in other languages
Star Trek III: The Search for Spock - 08/10 - Review of Tom Daish, submitted at 2010-09-26 19:57:16
After his stupendous effort for The Wrath of Kahn, James Horner was brought back to score the follow up. The film itself suffered from the odd numbered bad Trek film syndrome with lots of fairly iffy moments, including a particularly bad indoors for outdoors planet set complete with fibreglass trees. Given some of the impressive location shooting of later films, it's a shame the budget here was so limited. Horner's score is still a good effort and a worthy follow up, even though he seems somewhat less inspired this time around.
The whirling nautical theme of the original is largely displaced by the slower, broader theme and is essentially Spock's theme. A superb melody, full of pathos and a touch of wistfulness that seems just perfect. Horner's take on the Klingons is a tone filled melody, along similar lines to Kahn's motif, but the intervals give it a curiously oriental feeling. It doesn't quite match the ferocious simplicity of Goldsmith's fifth laden motif, but is still most appropriate. Around the brass idea, there's plenty of clanking percussion which doesn't so much drive it along as simply provide a bit of background interest. Ironically, one of the best parts of the track, Klingons, is the second half which actually features the music as the Enterprise returns to spacedock, one of the most magical moments of the entire score. Moving between expansive music for the wide shots of the ship, to more nostalgic moments and a lighter moment toward the end as the Enterprise docks.

Outside of the Klingon tracks, the best action is to be found in the lengthy Stealing the Enterprise, opening with a sprightly run straight out of Prokofiev's Romeo & Juliet, but quickly turning into a suspense builder before the final few minutes break out the main themes and plenty of athletic brass writing. The final few cues deal with the Katra Ritual where Spock's soul is transferred back to him from Dr McCoy. Horner treats these with no small amount of religious euphoria and plenty of mysticism. A sublime use of sustained synth pedal notes works particularly well and imbues everything with a gravitas that the film often lacked. The End Titles are the same as those for The Wrath of Kahn and the greater use of the fanfare main theme seems a little out of place here, although it works well enough.

I've noticed that many Horner fans are more impressed with this effort than Wrath of Kahn, although I suspect it's the greater use of the more elegiac writing for which he ultimately became popular. I would disagree that it's a better score. It certainly has plenty of spine tingling moments, but the action here isn't quite so through composed or inspired, even if the more emotional parts are more satisfying. Still a fine early effort with plenty to offer in the way of new ideas, thankfully not retreading too much of the Wrath of Kahn material, but enough to make the musical connection.
Star Trek III: The Search for Spock - 08/10 - Review of Andreas Lindahl, submitted at 2008-01-20 21:25:40
Many people think that the highligt of Horner's career were sometimes in the beginning/middle of the 80'ies, when he wrote, mostly action and adventure, scores like Krull, Star Trek II: The Wrath of Khan and this one, Star Trek III: The Search for Spock. And I have to admit that Horner indeed composed a bunch of terrific scores back then, and this is without doubt one of those.

"Prologue and Main Title" opens with Horner's main theme played on soft horn, before Alexander Courage's famous theme is heard for the first time. In "Klingons" Horner introduces a somewhat exotic and wild motif, for the Klingons, with what sounds like howling trombones and percussion. "Stealing the Enterprise" features some energetic racing strings in the beginning, before the music calms down and becomes a little mysterious and tensed. The latter half of the cue is dominated by suspense music. "The Mind Meld" and "The Katra Ritual" are slow, almost religious sounding, emotional cues, with "philosophical" orchestrations with a lot of electronic sounds. The last track, "The Search for Spock", is an absolutely horrible pop/hip-hop version of the main theme. Avoid it at all cost...