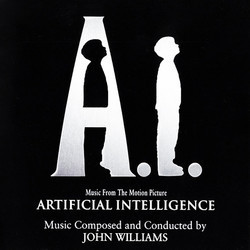 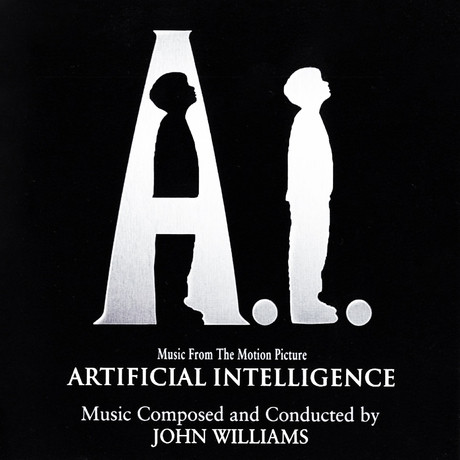 Show reviews in other languages
A.I.: Artificial Intelligence - 10/10 - Review of Tom Daish, submitted at 2010-10-02 12:12:03
Probably one of the most anticipated scores and films of the 2001 summer season, AI has received a mixed critical reaction as a film, but the score has been almost universally praised. As the film isn't typical Spielberg - surely everyone knows that it was a pet project for Stanley Kubrick before his untimely death - the score is a somewhat different style of Williams score. I suspect that Kubrick would have used more classical excerpts as he is prone to do, although while this is often successful, I can't imagine they would improve on Williams' original effort.

AI is one of his most imaginative scores for some time with Williams trying out a few new ideas, all of which are quite wonderful. His recent scores have been excellent, but haven't really broken much new ground, but the level of invention here is considerable. The first of these is the cyclic arpeggios which put to mind John Cage or Philip Glass, although set apart by the inclusion of some typical Williams harmonic twists as well as a melody. It is certainly brings to mind a large, somewhat dystopian society, which is of course perfect given the nature and setting of the film. Another idea that Williams briefly plays with is a brief burst of dance music type rhythms during The Moon Rising. It marks the most successful integration of popular music into a Williams score in decades, his previous attempts have often been a little awkward (particularly during one quite embarrassing sequence during his much sought after Spacecamp). The way the electronics blend in and out of the orchestra, finally giving way to purely acoustic instruments at least as good as any Jerry Goldsmith or David Arnold effort.

Perhaps the highlight of the score is Monica's Theme, introduced in the track of the same name (if you exclude the earlier vocal rendition) and given its fullest treatment during Where Dreams Are Born. Soprano Barbara Bonney provides a wordless vocal performance and not only is the theme itself absolutely gorgeous in every respect, the arrangement is flawless. It would be easy to compare the style to Morricone who has made this kind of arrangement a trademark, but that would be a disservice to Williams who simply uses the voice as his instrument of choice. A spine tingling moment and surely destined to become one of Williams' greatest themes. While much of the rest of the music has a gentle, other worldly and fairy tail quality, there are a couple of moments of horror, most notably the disturbing choral writing of Replicas which recalls the early cues of Close Encounters of the Third Kind.

For Always is essentially a pop version of Where Dreams Are Born and while it works quite well with words and a bracing performance by Lara Fabian and a slightly less effective duet version with Josh Groban, even though it still can't really compete with the clarity of the wordless performance. The electronic enhancements are liable to date the song a little, which is unfortunate as the purely orchestral sections of the accompaniment are marvellous. It used to be the case that you could listen to a John Williams score for instant gratification, but the increasing subtlety of his work invites the listener to play the album a few times to fully appreciate how the score evolves from the imposing start to the gentle piano variations on Monica's theme during The Reunion. Another outstanding Williams effort, highly recommended.
A.I.: Artificial Intelligence - 08/10 - Review of Andreas Lindahl, submitted at 2008-01-20 21:25:40
John Williams' score for Spielberg's A.I. Artificial Intelligence is a score that grows on you. I can't say that I enjoyed it the first time I listened to it. Sure, it had some good parts, but mostly I found it to be rather dull and themeless. But that would soon change. I have now listened to this score quite a few times, and it actually gets better for every listen.

The score can roughly be divided into two different parts. The first half of the album is dark and disturbing, and can at times be a little difficult to digest, thanks to some atonal and dissonant parts and the lack of a strong theme. Opening with the excellent "The Mecha World", Williams' creates a very "busy" and rythmical sound, with mostly brass and strings. The second cue, "Abandoned in the Woods" is darker, but equally dramatic, with tense and nervous rising and falling strings. Things calm down a little in "Hide and Seek" and "Cybertronics", before the darkness and the drama returns in "The Moon Rising", with its low staccato strings, dramatic brass and percussion. There's even some techno beats thrown in, which has to be a first for Williams. Sounds rather strange and out of place, to be honest.

"Stored Memories and Monica's Theme" introduces us to the second part of the score, which is more melodic and tender. It opens with soft choir, soon joined by the orchestra, at first creating a very disturbing and dissonant sound, before it gets more lyrical. This is where the main theme - "Monica's Theme - is presented for the first time, performed by piano and cello. Simply put, this theme is absolutely wonderful. Fragile, soft and lyrical, it is often performed on the piano, by cello, or by opera singer Barbara Bonney. It also forms the base of the song "For Always", written by Williams and performed by Lara Fabian. But more about that in a minute.

The voice of Barbara Bonney is worth a paragraph of its own, I think. Her soft, tender voice lends the music a very warm and human quality. "Where Dreams are Born" is one of the scores' highlights thanks to her wonderful voice, supported by strings, piano and a lonely oboe. And it is she and Monica's theme that dominate this second part of the score, closing the score with the lovely "The Reunion", offering several renditions of the beautiful theme. Like the score, this theme grows on you the more you listen to it. And it sticks. I have been walking around at work, humming this melody for several days now...