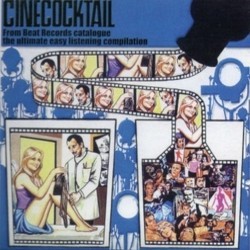 Cinecocktail - 08/10 - Review of John Mansell, submitted at 2014-03-16 12:48:26
This has got to be one of the better compilations of Italian film music that has been issued in recent years. It’s a bright bouncy and rhythm filled collection of themes and outstanding tracks from Italian movies of the 1960 thru to the 1980,s. Written and performed by many of the Italian film music industries top composers and musicians. In many ways similar to the I SOGNI DELLA MUSICA series(WHICH SHOULD BE RE-ISSUED) that was also produced by BEAT. CINECOCKTAIL is sumptuously packaged with so many interesting notes by the likes of Franco De Gemini, Francesco De Masi, Enzo G Castellari and Daniele De Gemini and eye arresting art work, this will be a popular collection amongst long term devotees of Italian movie music and a great introduction to any collector that per chance might be oblivious to the great music that has been written to the many productions that hail from Cinecitta. Disc one contains 20 tracks which are the work of composers such as DE MASI, DE ANGELIS, PREGADIO, PLENZIO, ORTOLANI, CIPRIANI,UMILIANI, MORRICONE, PIOVANI, ALESSANDRONI and FRANCO DE GEMINI. If you are a novice in collecting Italian movie music then I suggest that you rush out straight away and purchase this collection, its easy listening, lounge type tracks are certainly infectious ad uplifting, in fact it’s a compact disc that one could put on repeat and just listen to all day long.

It showcases also the unique and distinct sound of IL CANTORI MODERNI. The collection also features some unreleased tracks, for example YOU CAN DO A LOT WITH SEVEN WOMEN, the full version is included here, because when the original LP was issued there was not sufficient room to this. The tracks are taken from movies such as LA GATTA IN CALORE, PAPAYA ISLAND, IL MEDICO LA STUDENTESSA, UNA SULU ALTRA, MARCIA TRIONFALE, LA POLIZIA INCRIMINA LA LEGGE ASSOLVE and IL MOSTRO to name a handful. This collection just manages to capture and convey to the listener the original and inimitable sound that is Italian film music, fresh, vibrant and above all original. The second disc is equally as entertaining, but more up-tempo, as far as I can make out it is a remix CD, the themes of Pregadio, being reworked and re-mixed by Daniele De Gemini, Paolo Scotti etc, this is an entertaining listen, produced well and a great companion disc to CD number one, my preference out of the three tracks on disc two was track number three entitled FUNKY CHOPPER it reminded me a little of the style of Robbie Rivera slightly funky house, one to put on and do some fancy foot work to, (on your own of course). I cannot recommend this collection enough, watch out for Volume 2.