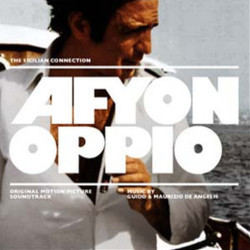 Afyon Oppio - 08/10 - Review of John Mansell, submitted at 2014-03-16 12:38:16
This soundtrack was always one of my favourites from the 1970,s, I think mainly because it was so different and had to it a quite raw or unpolished sound, the cover art was also simple but attractive an outstretched hand reaching across the white Cinevox album cover towards a poppy seed head devoid of its red petals and sliced open. The De Angelis Brothers are well know figures within Italian film music collecting circles and I have to say not always for being composers of pretty little tone poems or lush and lavish themes, they produced a number of scores for Italian and French productions during the 1970,s thru to the 1980,s and although they were certainly original when it came to construction, style and sound I would not say that they were Oscar material in any way. The brothers began to play music and also write songs etc in the 1960,s and were soon given a recording contract by RCA in Italy. Guido the elder sibling began to work in film scoring or providing music for films as early as 1961,when he worked steadily on Spanish productions, he first collaborated with Maurizio on film music in 1971 when they jointly penned the now classic spaghetti western soundtrack for THEY STILL CALL ME TRINITY after the success of the score for this popular comedy western Guido and Maurizio De Angelis remained busy and also gainfully employed scoring movies that were fairly successful at the box office within Italy and also gained some recognition in Germany and France mainly due to the composing duos association with films that featured Terence Hill and Bud Spencer. They also worked on numerous genres of film and each time came up with something that worked or was at least outstanding and on most occasions quirky and unique for what ever reason. The violent western KEOMA for example contained a serviceable spaghetti western score and to a degree contained many of that musical genres trademarks, but it was the rather outlandish and at times grating vocals within the score that gained De Angelis the attention for their work on the picture, personally I am not a fan of the score and for me the picture would have been served better by a more conventional spaghetti western sound, if there is indeed such a thing. AFYON OPPIO is in genre terms completely removed from the Spaghetti sage brush sagas that were produced in abundance, although its director film maker Fernando Baldi is quite a master at creating entertaining movies in many genres, his spaghetti western BLINDMAN is such one example and although the movie at the time of its release was slated by fans of the genre and critics alike it has since become something of a cult movie.

AFYON OPPIO or THE SICILIAN CONNECTION as it was alternatively entitled deals with the issues and permutations of drugs and the deadly business of illegal drug dealing, it is a credible and entertaining crime thriller and the directors utilizes a number of exotic and attractive locations to tell his story. The score opens with a trademark De Angelis vocal, a gravely sounding voice which performs lyrics that are fairly legible accompanied by a solo guitar that strums with organ underlining and augmenting the performance, then to this mix is added percussion and then the distinct choir of Nora Orlandi, the vocal performance is credited to Oliver Onions which is an alias for Guido and Maurizio and has been a brand for want of a better word that has become popular amongst the many fans of the composing twosome. The theme although rather oddball and at times musically disjointed is still an entertaining and also an interesting listen, it is one of those themes that gets right inside the listeners head and is something that days later one finds yourself humming or singing. The vocals incidentally are the work of long time De Angelis collaborator Susan Duncan Smith, and if you think you recognise the name then you should if you follow British politics because she is the sister of U.K. Parliamentary Minister Ian Duncan Smith. The theme minus the vocals can be heard at other points within the score and as an instrumental I for one think it works better, in particular within the cue ARRIVO A NEW YORK (track 10) where the composers combine guitar and harmonica with a slightly upbeat backing provided by the tapping of a tambourine adding punctuation and support. The theme also re-emerges in AFYON OPPIO (INST) TRACK NUMBER 5, again guitar and organ are utilized with percussion, fuzzy sounding woodwind and choir giving the piece substance and a real sense of melody that has about it a folk jazz vibe. Track number 6, also is a variation of this central theme CAMPI DI PAPAVERI is a plaintive and subdued flute solo which relays an atmosphere that is fragile and filled with a feeling of melancholy and solitude. Track number 7, IL PICCIOTTI is a traditional sounding Sicilian piece and tracks 8 and 9 are also written in the same style adding a touch of authenticity to the proceedings. Overall this is a score that will be welcomed by many but equally could be a soundtrack that will not impress other fans of Italian film music. Packaged well by Chriss Soundtrack Corner, with nice original art work and stills from the movie.