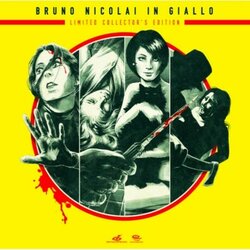 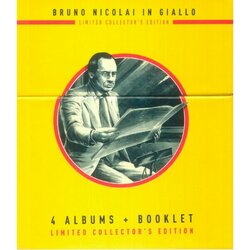 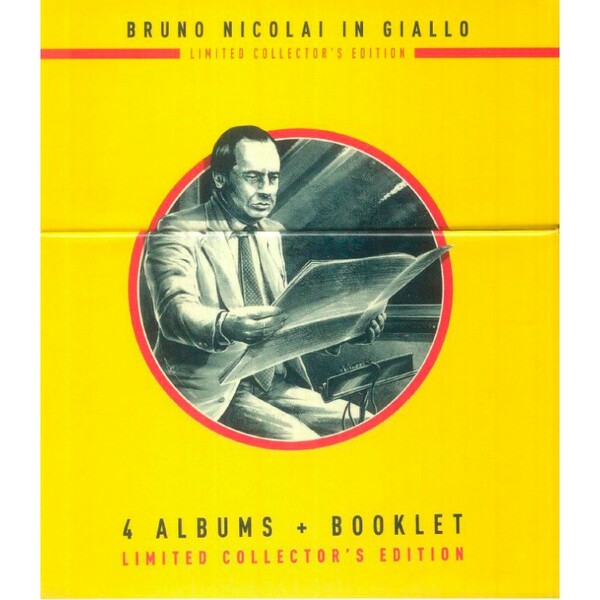 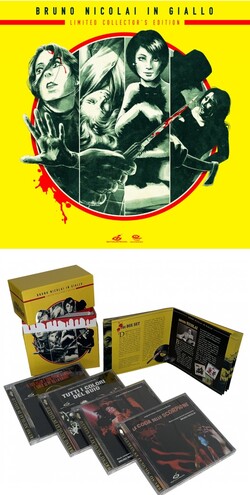 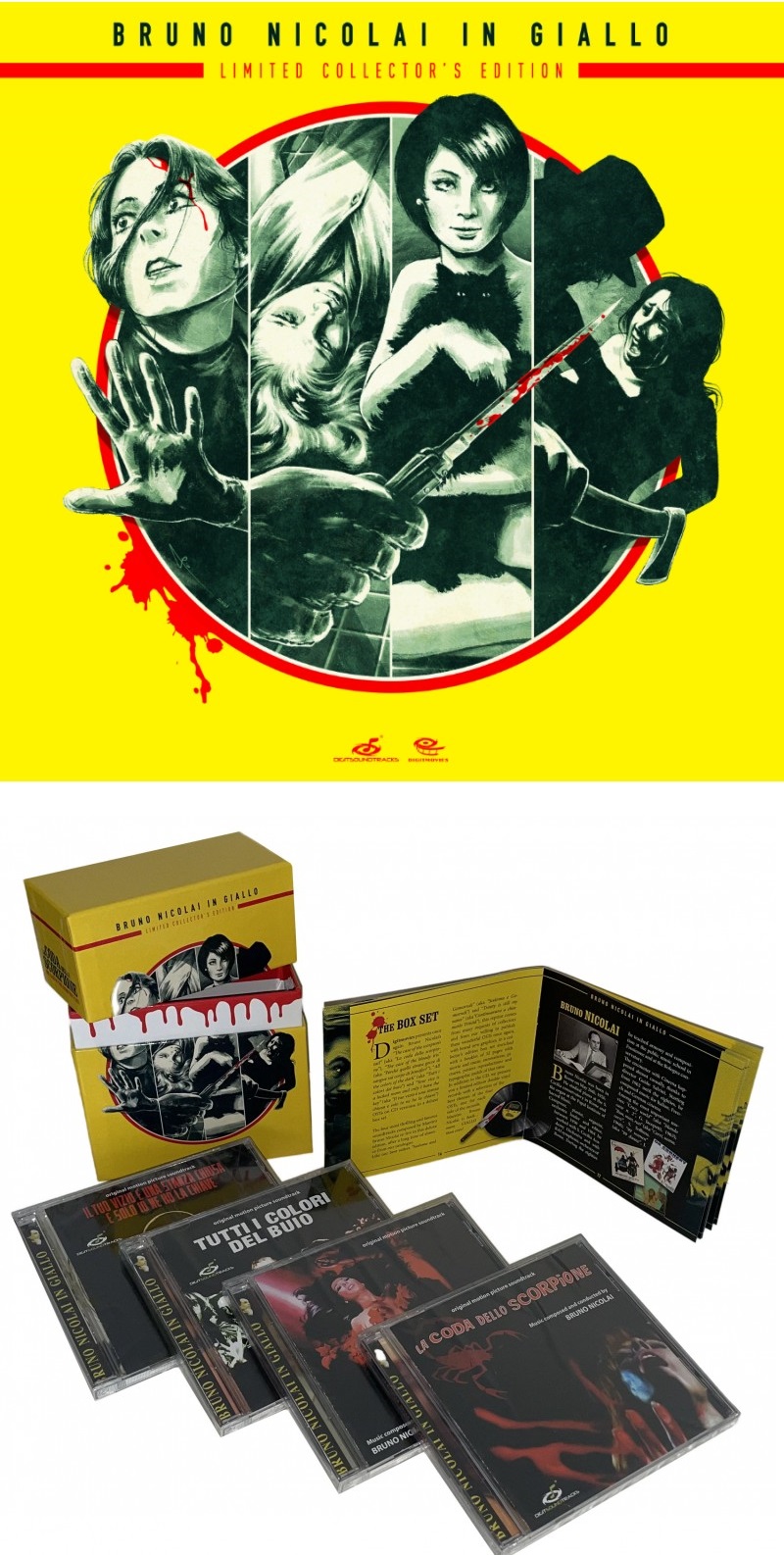 Digitmovies presents once again Bruno Nicolai’s “The case of the scorpion's tail”, “The case of the bloody iris”, “All the colors of the dark” and “Your vice is a locked room and only I have the key” OSTs on CD versions, in a deluxe box set.

Digitmovies presents once again Bruno Nicolai’s “The case of the scorpion's tail”, “The case of the bloody iris”, “All the colors of the dark” and “Your vice is a locked room and only I have the key” OSTs on CD versions, in a deluxe box set.

The four most thrilling and famous soundtracks composed by Maestro Bruno Nicolai re-live in this deluxe edition, after a long time of absence from our catalogue.
Like our best sellers “Sodoma and Gomorrah” (aka “Sodoma e Gomorrah”) and “Trinity is still my name” (aka“Continuavano a chiamarlo Trinitŕ”), this reprint comes from many requests of collectors and from our willing to publish these wonderful OSTs once again, with brand new graphics, in a collector’s edition box set enriched with a booklet of 32 pages with movie and music annotations, pictures, posters reproductions and typographic molds of that time.

Bruno Nicolai was born in Rome on May 26th, 1926. He studied piano at the S. Cecilia conservatory in Rome and the organ at the Papal Institute of Sacred Music. Composer, pianist, organist, orchestra leader and editor, between 1950 and 1964 he worked with S. Cecilia Academy Orchestra and with RAI symphonic orchestra of Rome. During the eighties he teached armony and composition at the public music school in Frosinone and at the Bologna conservatory.
The encounter with Cinema happened almost casually, thanks to director Guido Salvini. Starting from 1962 until the eighties, he composed music for Italian, French and German cinema.
Among the most important movies: “Crazy World” (aka “Mondo cane n. 2”, G. Jacopetti, 1963); “Run, Man, Run” (aka “Corri, uomo, corri”, S. Sollima, 1968); “99 Women” (aka “99 donne”, J. Franco, 1968), “Marquis de Sade's Justine” (aka “Justine, ovvero le disavventure della virtů”, J. Franco, 1968); “A Full Day's Work” (aka “Una giornata spesa bene”, J.L. Trintignant, 1972). He worked with Ennio Morricone, as compositor and orchestra leader, for the soundtracks of Alberto De Martino’s movies “Operation Kid Brother” (aka “Ok Connery”, 1966); “Dirty Heroes” (aka “Dalle Ardenne all’inferno”, 1967); “Here We Go Again, Eh Providence?” (aka “Ci risiamo, vero, Provvidenza?”, 1973) and Enzo Castellari’s “Cold eyes of fear” (aka “Gli occhi freddi della paura”, 1971). He signed numerous Italian thrillers OSTs, like Sergio Martino’s “All the colors of the dark” (aka “Tutti i colori del buio”, 1972), “The case of the scorpion's tail” (aka “La coda dello scorpione”, 1971) and “Your vice is a locked room and only I have the key” (aka “Il tuo vizio č una stanza chiusa e solo io ne ho la chiave”, 1972). He worked with Fiorenzo Carpi, close friend of his: “Ballo Excelsior” (1967) and “A White Dress for Marialé” (aka “Un bianco vestito per Marialé”, 1972). Thanks to his performing talents, he was asked to lead Carlo Rustichelli, Luis Bacalov and Nino Rota’s soundtracks. He died in Rome, on August 16th, 1991.

The Case Of The Scorpion’s Tail (La Coda Dello Scorpione)

Maestro Bruno Nicolai knew how to put in music the macabre homicides of that event, writing a dissonant music soaked with elements of avant-garde and jazz.
The soundtrack is enriched by two romantic yet nostalgic themes, as background of the love story of the protagonists. For this publication we used every take found in the original masters.

Miss Baumer, widow because of an explosion of the plane on which her husband Kurt was, goes to Athens to collect the insurance money. She receives one million dollars but she gets brutally killed by a mysterious murderer, who steals all the money.
The case is followed by an official of the Interpol and a Greek policeman and, later, by Cleo Dupont, young French journalist. The case gets muddled because of a sequence of murders.

Second thriller movie directed by Sergio Martino, after the remarkable “The Strange Vice of Mrs. Wardh” (aka “Lo strano vizio della signora Wardh”) released on February 1971.
The director wanted to give the protagonist part to Edwige Fenech, but he had to change his mind, since she was pregnant. The role was given to Swedish actress Anita Strindberg.
The movie was filmed in Greece, Italy and England. It was released in Italian theaters on August 16th, 1971.

Maestro Bruno Nicolai wrote a monothematic score based on variations of a nostalgic and romantic classical adagio for strings and harpsichord.
All the horrifying aspects of this story are described through a series of drammatic and atonal themes, alternated to the classic adagio.

Professor Oliviero Ruevigny, failed writer, erotomaniac and alcoholic, stuck in a marriage come to an end with his hated wife Irene, is suspected of killing one of his young lovers. There are no clues to accuse him, though.
After a while, in his villa, a maid gets killed and her body disappears. Floriana arrives to the villa, she’s the young and sassy niece of Oliviero who will take part in a series of depraved and mysterious plots, which could be only solved by a black cat.

Fourth thriller of Martino, with erotic and gothic elements and a finale inspired by Edgar Allan Poe’s “The Black Cat” (aka “Il gatto nero”). Shot in an evocative Italian villa, the movie is a forerunner of one of the most disturbing scenes of Kubrik’s “The shining” with a typewriter as protagonist.
The title originates from a phrase on a note in Martino’s “The Strange Vice of Mrs. Wardh” (aka “Lo strano vizio della signora Wardh”) that said: “Now I know that you’re trying to run from me… but your vice is a room locked from the inside and I have the key, just me”. It was released in Italian theaters on August 18th, 1972.

All The Colors Of The Dark (Tutti I Colori Del Buio)

Bruno Nicolai wrote and directed one of his best soundtracks for thriller genre.
The soundtrack is mainly based on orchestral dark passages, sometimes rythmic, sometimes atmospheric, which give a great sense of constant stress.
Other than the romatic love theme, the soundtrack includes another very important theme: that for the “Sabba” in coral version and lounge-psychedelic version with Beat arrangements, performed by Alessandroni’s Modern Cantors. It also contains the sitar execution of the great Alessandro Alessandroni.

Young Jane Harrison is traumatized by the killing of her mother and the miscarriage of her child, after a car accident.
Also, she always has nightmares of a man chasing her with a sharp knife.
Jane asks for help to a psychiatrist, doctor Burton. Mary, a mysterious neighbor, pushes her to take part to some black masses of a Satan worshipers, undermining even more the fragil mind of Jane.

Third thriller directed by Sergio Martino. Set in an autumnal and distressing London.

The movie stands back from the many movies born from Dario Argento’s success “The Bird with the Crystal Plumage” (aka “L’uccello dalle piume di cristallo”).
This time Martino mixes thrilling elements to esoteric ones, typical of Roman Polanski’s cinema. For this movie, the director confirms the duo Fenech/Hilton, made famous by his first thriller “The Strange Vice of Mrs. Wardh” (aka “Lo strano vizio della signora Wardh”). It was released in Italian theaters on February 28th, 1972.

Bruno Nicolai wrote a romantic theme for Jennifer, which is re-taken in various versions during the whole soundtrack.
The main theme has dark and dissonant strings passages, which make the listener feel tense and distressed.

Jennifer e Marylin are two models living in an apartment located in a big building. Jennifer is trying to get her life back after having divorced from a violent man who used to force her to have group sex and to take drugs.
She meets Andrea and begins an affair with him. Meanwhile, a young prostitute and a stripper get killed in the building. Suspects fall on the residents that knew the victims.
The hunt for the killer gets harder due to the largeness of the building.