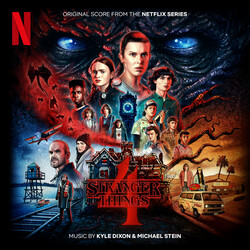 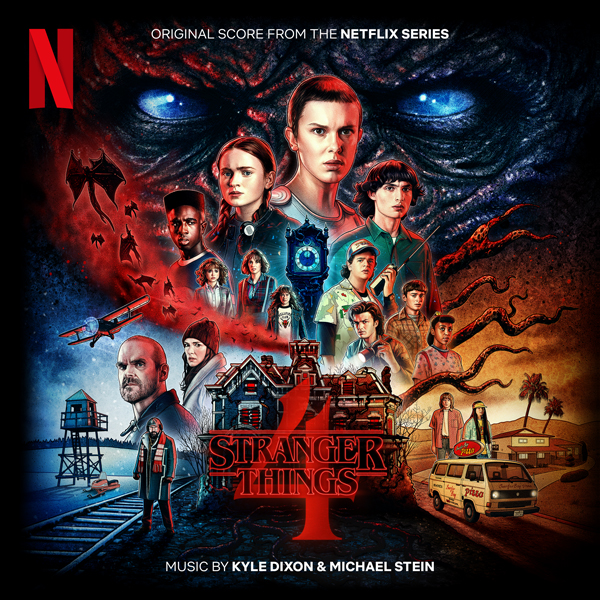 The epic 80-track score album is divided into two volumes that correspond with music composed for the two volumes of season four of the Netflix series. Whether they’re diving into the darker waters of season four with a more cryptic, goth tone alongside desolate textures for the scenes in Russia, or taking pains to preserve the warm feelings of nostalgia for a certain time and place, it’s clear that the music of Dixon and Stein is an integral, creatively cohesive element of the show.

Lakeshore Records and Invada Records presents the album digitally worldwide on July 1 with CD and vinyl versions forthcoming.
Created by The Duffer Brothers, Stranger Things 4 Volume 2 will debut on Netflix on July 1.

Dixon’s and Stein’s score melts into the scenes so that the viewers become wholly immersed in the Stranger Things universe, pulling our strings and manipulating our emotions. – Collider

“Tapping into an eerie world of synthesizers and vaguely ‘80s tones, the pair’s contributions to the Netflix original have undoubtedly helped shaped Stranger Things’ unique world and international success.” – Consequence of Sound

It’s been six months since the Battle of Starcourt, which brought terror and destruction to Hawkins. Struggling with the aftermath, our group of friends are separated for the first time – and navigating the complexities of high school hasn’t made things any easier. In this most vulnerable time, a new and horrifying supernatural threat surfaces, presenting a gruesome mystery that, if solved, might finally put an end to the horrors of the Upside Down.

Since its release in 2016, the global phenomenon “Stranger Things” has garnered over 65 award wins and 175 award nominations, including those from the Emmys, Golden Globes, Grammys, SAG, DGA, PGA, WGA, BAFTA, a Peabody Award, AFI Program of the Year, the People’s Choice Awards, MTV Movie & TV Awards, Teen Choice Awards, and many others. The three-time Emmy Award Nominee for Best Drama is one of Netflix’s most-watched titles.”Stranger Things” was created by The Duffer Brothers and is produced by Monkey Massacre Productions & 21 Laps Entertainment. The Duffer Brothers serve as executive producers on the series, alongside Shawn Levy and Dan Cohen of 21 Laps Entertainment, Iain Paterson, and Curtis Gwinn.

In the annals of film and television, certain musical themes manage to transcend the moving image. From the iconic whistle introducing Morricone’s The Good, the Bad and the Ugly theme to Tangerine Dream’s “Love On A Real Train,” memorable scores have the uncanny ability to sum up an epoch, an entire aesthetic.
The prolific Texan musicians Kyle Dixon & Michael Stein are responsible for a body of work that’s synonymous with the fictional town of Hawkins, Indiana, the supernatural everytown at the center of the Netflix hit Stranger Things. But as the small town becomes the unlikely site for a supernatural battle within the hit series, Dixon and Stein’s soundscapes, too, have expanded in lockstep. In the meantime, Stein and Dixon compose music for feature films, documentary series and large-scale installations and play in the band S U R V I V E. Working in the lineage of predecessors like John Carpenter and contemporary peers like Oneohtrix Point Never, Kyle Dixon & Michael Stein use a lifelong obsession with synthesizers and electronic music as a vehicle for larger-than-life visions.

While Dixon & Stein came to prominence composing music for a series that has become a cultural touchstone, Stranger Things, imagery and setting have always been central to the duo’s practice. In 2009, alongside Mark Donica and Adam Jones, they formed the live synthesizer band S U R V I V E. Leading up to the formation of the quartet, Dixon and Stein experimented with field recordings, venturing down tunnels and ascending water towers around Austin, Texas, hauling battery-powered modular setups and field recording equipment out to the sorts of places the Stranger Things kids might explore on their bicycles.
As opposed to the laptop-based performances common in live electronic music at the time, S U R V I V E hauled a studio’s worth of synthesizers and amplifiers into dive bars for legendary live performances, achieving the ability to fill the room with crushing sound. Whether they knew it or not, with S U R V I V E, Dixon and Stein laid the groundwork for their future as one of the pre-eminent scoring teams of our time. Rather than speaking in musical terms, they’d describe their instrumental synth music with visual cues—a helicopter soaring over a waterfall, a high-speed chase down darkened Los Angeles alleys.

When The Duffer Brothers found the band and tapped Dixon and Stein for work on Stranger Things, the duo rolled their sleeves up, taking on a workload typically handled by a fleet of composers and assistants. As the show gradually transformed from ’80s sci-fi period piece to an expansive supernatural epic, Stein and Dixon rose to the occasion.
While their music for early seasons focused on the timeless sound of ’80s analog synthesizers, they’d soon harness melodies and atmospherics befitting Eleven and Mike’s interdimensional struggle. Music is a main character in Stranger Things, with Dixon and Stein’s soundtrack weaving in and out of triumphant, period-appropriate songs like Kate Bush’s “Running Up That Hill.”
That song topped the charts after its pivotal use in season four. Similarly, the duo’s tireless work on Stranger Things catapulted them from underground synth heroes to key composers for modern film and television. Stein and Dixon won an Emmy for Outstanding Original Main Title Theme Music for their work on the show, in addition to nominations for multiple Grammys and ASCAP awards.

For recent seasons of Stranger Things, the duo has worked at a daunting pace, crafting the equivalent of a feature film score every two weeks. Somehow, they’ve also found time to work on multiple feature films in recent years. For Joaquin del Paso’s 2021 independent psychological thriller The Hole In The Fence, Stein and Dixon paid homage to Tomita’s epic synthesizer compositions as well as the pioneering electronic experiments of Oscar Sala. Their score received a Hollywood Music In Media Awards nomination for Best Independent Score, while the film itself premiered at Venice Film Festival and took home best film honors at the Cairo Film Festival.
They also composed music for Meow Wolf’s massive Denver site. The multimedia installation features ab unnersuve zone scored by the duo, who were tasked with conceiving a simple, Close Encounters-style melody that saves a fictional world. Over the pandemic, Dixon and Stein managed to collaborate remotely with musicians and multiple choirs, even integrating the mysterious and singular sounds of a Bulgarian Women’s Choir into their Meow Wolf score. The duo also composed the score for the 2021 horror-tinged thriller Retaliators, adding to a burgeoning catalog that has placed Stein and Dixon’s soundscapes behind VR-views of the cosmos (Spheres), scenes from ’90s Silicon Valley (Valley Of The Boom), and the journey of an 11-year-old transgender girl (Butterfly), to name just a few.

After this prolific run, Dixon and Stein are simultaneously going back to their roots and embracing new challenges. Currently working out of their respective, hardware-heavy studios in Los Angeles and Austin, they’ll soon reunite with their band, S U R V I V E, for a new album and worldwide touring.
At heart, Stein and Dixon are avid students of electronic music history who constantly explore new methods of composition and scoring. While they have a clear facility for soundtracking the supernatural and otherworldly, Stein and Dixon have an equal interest in scoring quieter, decidedly human drama. It’s been a wild decade for Kyle Dixon & Michael Stein, who have gone from DIY tinkerers in Austin to introducing a whole new generation to synthesizers via the alchemical combination of sound and moving image. The images have been in their mind all along. Now we just get to watch them.