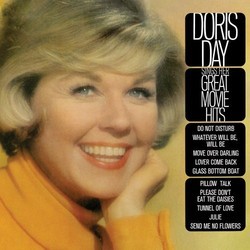 When Doris Day burst onto the big screen with Romance on the High Seas in 1948, it was clear that a very special motion picture star was born. Warner Brothers and famed director Michael Curtiz recognized that the former Doris Mary Anne Kappelhoff possessed considerable talents and appeal beyond her big band vocalist background. Their judgment proved to be prescient: Doris racked up dozens of hit records during the 1940s, 1950s and 1960s, many of the songs coming from her film musicals and comedy outings which featured title tunes performed by Doris. Starting with It s Magic from her movie debut, and continuing with hits like the Oscar-winning Secret Love from the western Calamity Jane alongside best-selling albums of songs from Love Me Or Leave Me and other cinematic outings, Doris enjoyed a dual career on records and film.

Now, as part of its tribute to the legendary lady on her 90th birthday year, Real Gone presents the first-ever CD issue of the 1966 Columbia/Harmony album Doris Day: Sings Her Great Movie Hits, expanded with over a dozen bonus tracks (plus liner notes featuring quotes from Doris and photos) for a total of 24 classic Day performances. Focusing on the last half of her movie career, this anthology presents Doris in a pure pop mode, offering mostly upbeat opening tunes from the great comedies of the era that made her the #1 female box-office star throughout the early and mid-1960s. First and foremost are songs from the beloved trio of Day-Rock Hudson classics Pillow Talk, Lover Come Back and Send Me No Flowers, in addition to a pair of bouncy ditties from Day's pairings with Rod Taylor (Do Not Disturb and The Glass Bottom Boat). Doris even gets mod when rock-and-roll producer son Terry Melcher produces and co-writes 'Move Over Darling,' a top 10 UK hit arranged by another music legend, Jack Nitzsche. Every single Day movie from 1956-1967 in which she sang is represented here, starting with Doris' most beloved song (the original version of 'Que Sera, Sera' from Alfred Hitchcock's The Man Who Knew Too Much) on through the composition 'Caprice,' inspired by the James Bond spoof of the same name. In film language, this is truly a long-overdue sequel to the million-selling Doris Day's Greatest Hits.