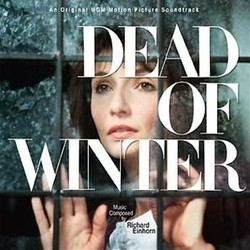 Just before the thriller genre made a huge comeback in September of 1987 with the release of Fatal Attraction, earlier that year MGM released a nifty, old-fashioned thriller called Dead Of Winter, directed by Arthur Penn (Bonnie and Clyde, Mickey One, Night Moves, Little Big Man), starring Mary Steenburgen, Roddy McDowell, and Jan Rubes. The film was actually an unofficial remake of Joseph Lewis 1945 film, My Name Is Julia Ross. Here, in homage, one of the characters is named Julie Rose, and another is called Joseph Lewis.

Penn had a good deal of fun with the thriller conventions, with Hitchcockian touches, a big, foreboding house, a severed finger, evil machinations under the guise of something innocent, blackmail, deceit, and an innocent heroine thrust into those evil doings.

The reviews were mixed, but respectful  the New York Times critic Janet Maslin wrote, When a director approaches Gothic horror with this much enthusiasm, the results are bound to be as merry as they are frightening. So audiences for Arthur Penns Dead of Winter are in for a hair-raising treat. And Roger Ebert wrote, The movie itself is finally just an exercise in silliness  great effort to little avail  but the actors have fun with it, the sets work and there are one or two moments with perfect surprises.

For the films score, Penn hired Richard Einhorn, a composer who straddled the worlds of classical and film music. His opera with silent film, Voices of Light, was hailed as a great masterpiece of contemporary music and has had over 150 performances. Its CD (on Sony) was a Billboard classical bestseller. Prior to Dead Of Winter, he scored several films, including Dont Go In The House, Eyes Of A Stranger, and The Prowler, among others, and subsequent to Dead Of Winter he scored Bill Condons cult film, Sister, Sister.

As it turned out, Einhorn was the ideal choice for Penns film  the then-current vogue for thrillers, chillers, and horror back in the 1980s was an emphasis synthesizers. Einhorn took the opposite approach, with wonderful, atmospheric scoring for a real orchestra consisting of piano, harp, reeds, strings, and percussion. His score is eerie, beautiful, suspenseful, and perfectly evokes the snowy New England setting.

Dead of Winter is mastered from Richard Einhorns personal digital tapes, which were in perfect condition. We present the entire score in film order, followed by a short suite of alternate cues.

With Dead Of Winter, Richard Einhorn wrote one of the best thriller scores of the 1980s, and its a pleasure to finally bring it to CD. This release is limited to 1000 copies only.