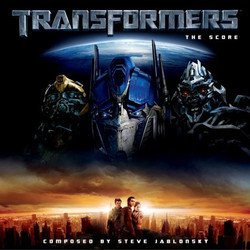 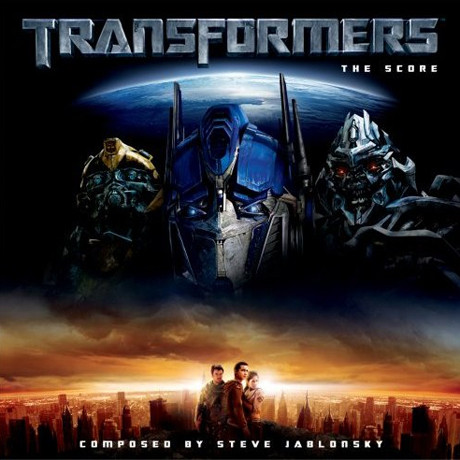 So lets start with the annoying stuff. Transformers is a Media Ventures/Remote Control/Hans Zimmer score in the grand old style  think The Rock, think The Peacemaker, think Crimson Tide. Unfortunately, those scores were written ten-plus years prior to Transformers, so the power-anthems, male choruses and half-orchestral, half-synthetic action music just doesnt fly quite as well anymore. Transformers in a word is DERIVATIVE.

So why do I give it such a high mark?

Believe me, Id like to know myself. All I can say is, whenever Jablonsky strikes up his (well, Zimmers) eighth-note string ostinatos, Batman Begins style (as in the tracks Autobots, Arrival to Earth, Youre a Soldier Nowetc.), I cant help but like it. This score may be less original than, say, Crimson Tide, but it is more enjoyable for some reason I cant really put my finger on.

Take a track like Arrival to Earth, for example: probably my favorite on the album. Its all in the tired old Zimmer style  ostinatos, choirs, power anthems, rumbling drums and a deep bass mix to round off the package. Two themes are brought to call here: a sort of bitterly heroic theme for the films human soldiers that is performed mostly on strings at first, then with the usual deep drum (pad)s and the obligatory addition of choir. Typical power-anthem stuff  but it gets me every time, and here is no exception.

The other theme in Arrival to Earth is the Autobots theme, heard here, in the track Autobots and throughout. This idea is pure imitation Hans Zimmer  its a first cousin to the Maximus theme from Gladiator, and isnt too far removed from the Jack Sparrow entrance cue from Pirates of the Caribbean: Curse of the Black Pearl either. But hell, that kind of music is perfect for a dumber-than-dumb Michael Bay flick, and it works well in context.

There are a surprising number of lesser themes on call in Transformers, probably another reason why the album is more enjoyable than other Media Ventures offerings. For example, the Decepticons receive what is probably Jablonskys most interesting and original motif. Its a two-note decending motif, chanted menacingly by a male choir. Its basically Jerry Goldsmiths The Omen combined with the male choirs from Crimson Tide and The Peacemaker. The ostinato-like quality of this motif gives Jablonsky the opportunity to mix it  sometimes quite intelligently with something almost resembling counterpoint  with other themes, such as in the track Sam on the Roof.

Other themes include a growling ostinato in Scorponok  sounding suspiciously like the Kraken theme from Pirates of the Caribbean: Dead Mans Chest  that is expanded into an excellent action piece. At about two and a half minutes into that cue, the ostinato becomes another bombastic, militaristic theme that remains a favorite among those irritating Transformers fanboys (Ill talk about them later, dont worry). Interestingly (coincidentally?) it sounds something like the track Zoosters Breakout from Madagascar, slowed down by about 50%.

Then theres the rather anonymous themes for the All Spark (heard first inThe All Spark, big surprise, performed on solo cello) and the theme for the almighty Optimus Prime himself. The latter is a further source of irritation for me, as it opens with the exact same notes as the so-called Knights March from Hans Zimmers King Arthur (the theme at the end of All of Them!).

Finally, we have a minor-key choral extension to the Autobots theme, heard most prominently in the final cue, No Sacrifice, No Victory. It gives the score good closure, but again, Ive heard this stuff a zillion times before, be it Zimmer, Trevor Rabin, Mark Mancina, Nick Glennie-Smith or yadda yadda yadda whose name features on the album.

Now that Im on such a roll with pointing out all the derivations Transformers is guilty of, I might as well name the rest of them, starting with the action theme at the beginning of Soccent Attack, a theme that is similar in both progression and orchestration to one at the beginning of Molossus from Batman Begins. Then theres Jablonskys failed attempts to bring in some lighter music to represent the main human character, Sam Witwicky, in Sam at the Lake and Witwicky. Failed because this is the third regurgitation of that particular music  its inspired by Trevor Rabins National Treasure, which itself was an obvious nod to the distinct, percussive, marimba and xylophone-led pluck-and-struck style of Thomas Newman (especially his score for American Beauty).

Yet another source of irritation for me born of the Transformers score is the horde of Megan Fox-adoring fanboys who are hailing Steve Jablonsky as the next Messiah, or at least the next Mozart. As admirable as it is to see such people listening to film music, I sincerely doubt that any of them have expanded their horizons to include any of the more intelligent scores out there, whether Media Ventures or no. Not since Pirates of the Caribbean: Curse of the Black Pearl has a score so easily reached the general public. Odd, isnt it, how the lesser-quality Media Ventures scores are so popular while the intellectually more sound ones of the same period (The Last Samurai, The Da Vinci Code) go comparatively unnoticed.