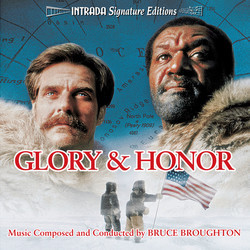 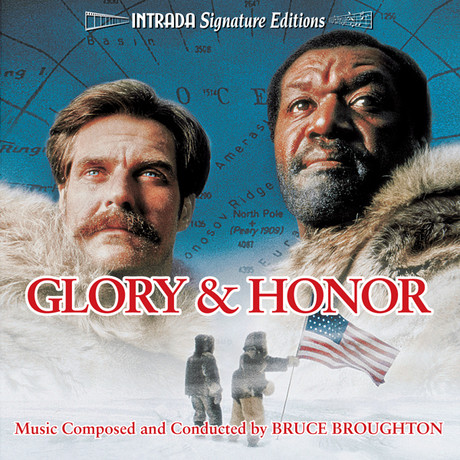 Bruce Broughton wrote outstanding music for the television production Glory & Honor. So much so, his powerful score won the 1998 Emmy for “Outstanding Music Composition.” Intrada is proud to present the world premiere release of this rich and exciting soundtrack on CD for the first time, complete and in picture sequence from the original scoring session masters recorded digitally and mixed into two-track stereo by Armin Steiner. For digital purists, every step in the audio assembly of this album, from session recording through mixing editing and final mastering was performed in the digital domain.

After “The Album” portion of the CD we offer seven “Extras” that include a very brief scoring sequence, a short non-visual source cue composed by Broughton and all five of the “bumpers” he recorded for using as transitions and fanfares going into the numerous commercial breaks. Listeners wishing to program these “Extras” into the album can do so by placing “Island Or Highway” (track 23) after “Matt’s Invitation” (track 5) and “Snow Games” (track 24) after “Final Assault” (track 19). The five bumpers were used throughout the televised presentation, selected and repeated as necessary for each of the commercial breaks. These can be placed anywhere throughout the album that the listener so desires as they were not written for specific positions in the production. Musically speaking, however, they are probably best positioned after fortissimos, major key cadences or other climactic moments. The extras can also be played by themselves as a short “mini-suite”.