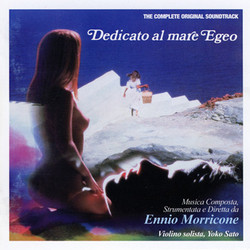 The awesome, full melodic score composed, orchestrated and conducted by Ennio Morricone for this film was made available for listening on a Japanese LP (Columbia Records LX-7062) soon after the film came out in 1979. The album contained a selection of 11 tracks, and quickly became one of the most sought after items among collectors. The only CD reissue (SLCS-7119) of the score was produced in Japan in the label SLC in 1992. Apart from the original album content the CD also featured a cover version song of the main theme, arranged by Walter Rizzati and performed by Ruggero Gatti. The SLC CD was sold out very quickly and has been out of print for several years by now. Due to its extreme rarity and great artistic value, a new reissue of this score has been highly demanded by collectors. Quartet Records was fortunate enough to locate the original publisher and owner of both the music and movie rights, and kindly offered to realize a long awaited special re-issue of the score.

The original elements of the actual 1979 recording session were thought to be lost but recently rediscovered still in mint conditions in Japan. This source gave us the possibility not only to include extra music on our new CD edition but also to present the whole score with an improved sound quality. It is widely admitted that in the past soundtrack album programmes were compiled using 2nd generation copies of the original master elements. This practice sometimes resulted in a slightly colourless sound with more tape hiss or even in minor sound defects. For that very reason we decided to re-create the album program from the original master elements so as to achieve the best possible sound with more dynamics and with significantly less tape hiss. But the jewels in the crown were the numerous extra tracks found on the mastertape that have been included on this new expanded edition of more than one hour playing time.

Restored and mastered by Dániel Winkler, who also provides liner notes for the lavish package, including a 20-page full color booklet.