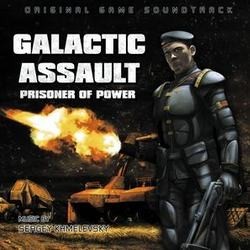 Galactic Assault: Prisoner of Power is a turn-based strategy game developed by Akella, based on the exciting science-fiction novel of Arkady and Boris Strugatsky. In many ways the game is very similar of previous Wargaming.net releases with a couple of new additions. For instance, if you decide to shoot at an enemy, it will immediately shoot back in response and won’t wait for his turn (this makes the turn-based game a tad more realistic). There’s also a very strong enemy AI who is capable of differentiating between the troops and is ready to attack the weaker pray before going for the juicier, harder opponent. On the other hand, soldier motivation also becomes a factor and if there’s not enough trust – good luck getting them back!

Our main hero is Maxim Kammerer, who is forced to crash land on an alien planet due to a technical malfunction. The seemingly deserted planet turns out to be a lot more varied than he initially thought… In fact, there are four rival colonies fighting for survival. After getting captured and escaping, Maxim decides to discover the planet even though the different nations are far away from being on speaking terms. The original Strugatsky novel was a clever way of social criticism about the killer race between different ideals and while only fractions of the original subtext could be transported to the game, Global Assault is still an intelligent game where you’ll have a hard time finding any allies – so better start working on your own!

The score to Galactic Assault: Prisoner of Power was written by Sergey Khmelevsky, who studied music in Belorussia before applying his skills to the world of video game music and sound design. The energetic score is characterized by a great variety of sampled instruments representing the four major cultures battling for the domination of the planet. Khmelevsky began his work by writing two tracks called 'The Battle' and 'First Strike' withough the game - these cues were inspired by just the screenshots. The project continued half a year later after other projects were completed, but those intitial gut reactions stayed in the score and played a very important role later on. The score is as varied as the planet: there are creepy textural cues for the unknown parts mixed with powerful battle pieces for the rivalry of the civilizations. If you enjoyed our prior releases of Akela scores, this should be interesting as well.