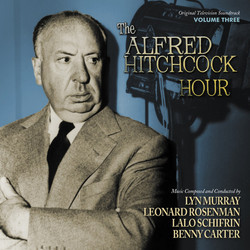 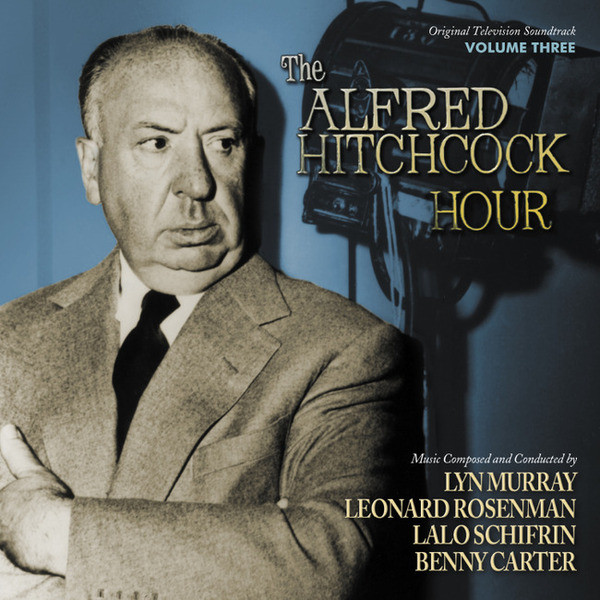 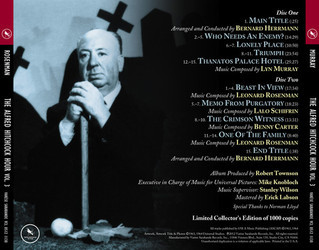 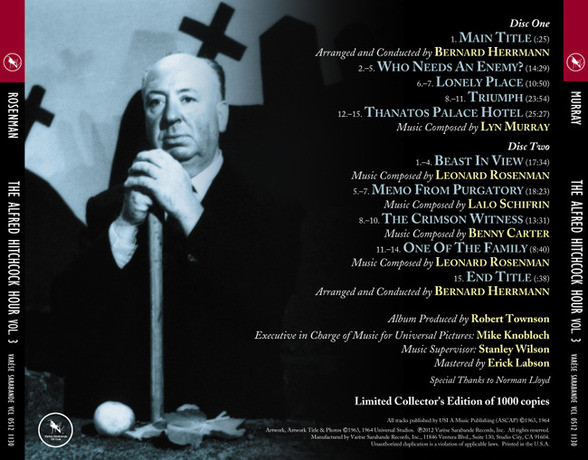 Our historic series of releases of music from The Alfred Hitchcock Hour continues! The first two volumes of music from the series focused solely (just as they should have) on the music of Bernard Herrmann. Having released every note of all 17 Herrmann-scored episodes, it was time to move on to other composers, and we couldn’t be more excited about it.

The first disc of this special 2-CD set presents 75 minutes of music by the Hitchcock Hour’s most prolific composer … Lyn Murray! Murray’s scores were exceptional and varied. As you would expect, they have a very different feel from Bernard Herrmann’s music and each of the four Murray scores we include here (Who Needs An Enemy?, Lonely Place, Triumph and Thanatos Palace Hotel) show a completely different side of the composer. His music can be breezy, beautiful, exotic, adventurous … Lyn Murray could really do it all and we’re thrilled to devote our first CD ever to his music.

Disc two of this set presents scores by three legends … Leonard Rosenman (Beast In View, One of the Family), Lalo Schifrin (Memo From Purgatory) and Benny Carter (Crimson Witness).

The aficionados who know these episodes will realize immediately how exciting this release is. For those not familiar with these scores and perhaps have no Lyn Murray in their collections at all, you are in for such a treat.

Featuring over two hours of premiere music from this television classic, this landmark release is an absolute must for fans of each of the four composers.