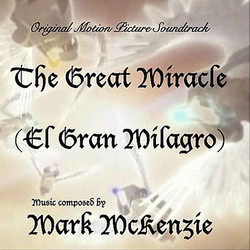 Mark Mckenzie has always been a composer of much interest, his scores for film and also television have always lit up the individual project that they were intended for and have elevated and supported it each and every time, no matter what the subject matter or indeed the budget. This soundtrack is no exception to any of that, in fact I would say that this is probably the composers most excellent work thus far. I say thus far because I trust he will continue to write music for movies for many years to come. This is a score for an animated feature which has been produced in Mexico, the music is just gorgeous. It is inspirational and haunting to the point of being distracting, in a pleasant way of course. The composers fertile and celestial themes surround and envelop the listener and just mesmerize one from the offset. This is a score that contains so much passion, such large helpings of poignancy and huge slices of humbleness interludes of melancholy and also an atmosphere that is awe-inspiring. But above all else this is a work that is spilling over with luxurious melodies and brimming with heartrending tone poems that glide and segue into each other creating an ambience that is relaxing and serene. As I listened to the work, I tried to think what style or what composer I could equate it to, but it is difficult to do this as one is just being immersed in so much quality music. But I will say I did think that maybe I could liken this marvellous score to the work of Italian composer, Bishop Marco Frisina, there is such a depth of emotion within it. It is akin to Frisinas sacred music and also has many affiliations with his music for movies such as PAPA GIOVANNI. Then there is another style and sound that can be likened to James Horner in his early days, ie: WILLOW, BRAINSTORM etc. I think its the choral sections more than anything that attract me to Mckenzies score, he fuses choir with inspiring strings that also posses a sincere and emotive quality, he adds brass and woods to give the work profundity and body whilst on high and as if from nowhere we hear little nuances of sounds such as trills from woods and chimes or bells and delicately plucked harp some of which are only just audible but they complete the musical picture, bringing each piece together and making the listening experience a complete one.


Cues such as ANGELS, DEMONS AND PRAYER are riveting listening, the composer utilising to full effect the string section, combined with strident brass and the ever present heavenly choral backing, this particular cue has an air of danger about it at first, but this mood changes swiftly but only briefly into a more relaxed almost laid back tone, brass then introduce the slightly discordant sounding theme once again which all too quickly melts away and is replaced by pensive sounding woods which are supported by delicate sounding strings, again the atmosphere alters and we are taken into a darker musical realm by the composers effective placing of shadowy low strings, then the cue erupts into a triumphant sounding piece for strings that are heralded in by proud sounding brass flourishes, a wonderful track that is for me one of this scores many highlights. ASCENSION/GLORIA PARTRI is also a cue I would recommend without reservation, it is a blissful composition that has choir and strings in a soaring unison, brass flourishes and an amazing crescendo where all the aforementioned components of the orchestra come together to create a very special composition. Then there is A CLEAN SOUL, which begins with organ playing a delicate melody punctuated by harp the melody is not dissimilar to the opening of AVE MARIA and evokes a spiritual atmosphere that is relaxing and peaceful, the organ and harp are joined by underlying strings after approximately a minute who at first support then take on the theme giving it a full working, the main part of the theme being carried as if it is weightless whilst choir and other members of the string section provide a magical sounding background.

This is an inspired score, a special work within the world of film music, it is a soundtrack that once heard will remain a firm favourite amongst collectors of film music, it is a work that will make cinema audiences weep and create even greater emotion for the story being told on screen. Scores such as this happen rarely these days, and when one such as this does emerge we should embrace it, savour it, adore it and shout from the rooftops about it
An essential purchase.