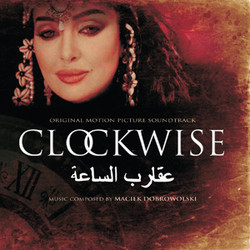 Clockwise tells the story of Saad Ben Khalaf, a singer/drummer who sells old watches in Souk Wakef in the center of Doha, the capital of Qatar. Saad had a troubled childhood: he is an orphan rescued from a shipwreck, which was crushed in a devastating storm. As the only survivor of the tragedy, Saad was found and raised by Atique Ben Barud, who knows all too well how it feels to be the last of his kind. Atique was one of the three men who learned the forbidden art of Fijiri and is the only one who could still share the secret if he weren’t killed immediately. Through one of the magical watches in his collection, Saad take a trip back to the 1930s where he learns about his stepfather’s secret and also falls in love with Jeena, a beautiful female jinn who may be able to lift the curse on Atique.

Directed by Khalifa al-Muraikhi, Clockwise was the first movie produced in Qatar. In order to bring some Western sensibilities to this colorful recreation of 1001 Arabian Nights-style fantasies, the director hired Polish composer Maciek Dobrowolski to do the score for the film. The score features four big themes in total, most of them are recurring in various cues. There's a theme for female jinn Jeena, whom the composer saw as the main character. There’s one theme for Saad’s surrogate father, Maciek's personal favorite of the bunch. The third key theme for the time-travelling represents the transition between the present and the 1920s when the main part of the movie takes place. Finally there's the brooding music for Kharaba (the world of the jinns) and some self-contained pieces, like an authentic dance. Clockwise is the first feature length-score from Maciek – based on its quality, we can hope to work with him on many more occasions!
' Clockwise ' Original Motion Picture Soundtrack
Limited Edition of 500 copies
Label: KMRCD 025
Date: 2011
Tracks: 24
Time: 48'08