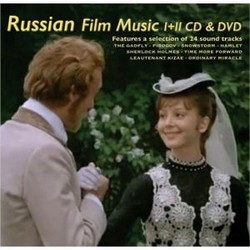 The films featured range throughout much of the Soviet period - the earliest music heard is from the 1930s while the latest was composed in 1987. The DVD shows original film clips (with English subtitles) but synchronised with the digital quality sound tracks recorded by Bel Air Music (for Russian Film Music I & II) rather than the original film soundtracks. A few extracts of 1930s films were not produced because of inferior quality, so there are 19 film clips on the DVD (playing for over 2˝ hours) but 24 tracks on the 79-minute CD. The DVD has one remarkable bonus track, the famous Adagio from the ballet 'Spartacus' by Khachaturian, filmed in 1968.