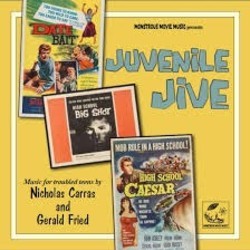 'JUVENILE JIVE' is an amazingly cool 2-CD set containing the complete scores from three juvenile delinquent films of the 1950s and 1960s. Complete with Big Band-influenced rock and roll, crazy bongo beats, and lots of exhilarating film music, this audio extravaganza is the perfect antidote when you’re feeling like Squaresville, man. High School Big Shot (written and directed by Joel Rapp) is a 1958 teenage film noir that benefits mightily from the marvelous jazzy score by Gerald Fried. Both Date Bait (1960) and High School Caesar (1960) sport Nicholas Carras scores, and he was a master in this genre. Better than wearing a black leather jacket and pointy-toed shoes, the almost two hours of music on these albums will bring out the troubled teen in you – regardless of your age. The release includes the rockin’ title songs from Date Bait and High School Caesar and a 28-page booklet!