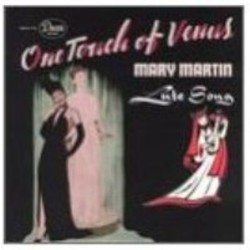 One Touch of Venus and Lute Song in Decca's Broadway Gold series includes original cast recordings taken from the two most important shows Mary Martin appeared in apart from Peter Pan and South Pacific. These are Ogden Nash, S.J. Perelman, and Kurt Weill's One Touch of Venus (1943) and Bernard Hanighen and Raymond Scott's Lute Song (1946). While Martin's star turn in Cole Porter's 'Leave It to Me' (1939) singing, famously, 'My Heart Belongs to Daddy,' established her as a force to be reckoned with on Broadway, the route from there to immortality with South Pacific was an arduous one, fraught with failures and projects that never got off the ground. One Touch of Venus was an exception; it garnered 567 performances, a touring show, and a movie adaptation, not to mention Weill's masterful songs 'I'm a Stranger Here Myself' and 'Speak Low.' Modern singers perform these numbers with a bit of more low-key approach than did Martin in 1943; listening to Martin shoot to the top of her voice, forte, at the end of 'I'm a Stranger Here Myself' after knowing the song only, say, in Angelina Reaux's version, might send one jumping out of his/her seat. Likewise, Kenny Baker's strident tenor -- looked upon as just the right voice for this music in 1943 -- has not worn as well as it might have owing to changing tastes and a revised standard of interpretation in regard to Weill. Nevertheless, if you had a seat in the house for One Touch of Venus in 1943, then this is what you would have heard. One aspect of this recording that continues to enlighten is Maurice de Abravanel's flexible, sprightly, and dignified direction of the orchestra, cementing his reputation as one of the finest music directors in Broadway's history; the Utah Symphony's gain was surely Broadway's loss.
On the other side of the coin was Lute Song, an offbeat 1946 project that proved one of composer Raymond Scott's few contributions to the musical stage; were it up to Scott, he would have been happy to have found more employment there. Lute Song was so weird that it only lasted 146 performances before it closed, and yet the visibility it provided to Martin proved essential in gaining her entrance into South Pacific, a show that kept her gainfully employed for more than three years. While the pseudo-Chinese 'Mountain High, Valley Low' and unusually serious (for Broadway, anyway) 'Bitter Harvest' are tunes that have their interesting qualities, it is Scott's instrumental pieces that win the day. Imperial March and Dirge are two of his most ambitious conceptions in terms of orchestral music, and devotees of Scott should be aware that this release exists, even if they don't listen to much more than Lute Song itself. However, 'See the Monkey' has to be the oddest selection Martin ever sang; to some, that in itself is enough to justify obtaining this issue.