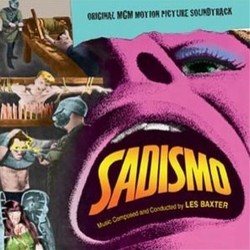 ACTUALLY FILMED IN THE DARK CORNERS OF THIS SICK WORLD!

In 1962 a documentary called Mondo Cane was unleashed on the world and became a box-office sensation. The film was such a huge success that it spawned its own genre  the mondo film, and soon everyone was rushing out their own mondo shock docs  Mondo Cane 2, Malamondo, Women of the World, Africa Addio, Addio Zio Tom, and some really low-budget knockoffs like Mondo Bizarro and Mondo Hollywood. A latecomer to the game was 1967s Sadismo (alternate title, of course, was Mondo Sadismo), a shock doc about torture and cruelty and things taboo and exotic practices from around the world. The film was released by American International, and while it would be fun to write about the film in detail, the fact is that it would be near impossible to do so, since the film has never been available on home video and most likely would not have received any television airings due to its extreme subject matter. Even the imdb listing has almost virtually no information. But, a perusal of the films pressbook gives a pretty good idea of what audiences were in for.

HOW MUCH SHOCK CAN YOU STAND?

Thats what the lurid ads screamed, along with other great bits of hyperbolic tag lines  Every conceivable, brutal TORTURE known to man civilized or savage A catalog of cruelty SEE the rack  thumb screw  iron maiden  torture drugs that make men slaves  bizarre human sacrifices  today!  well, you get the idea.

As was its practice back then, American International had the US release scored by Les Baxter. Baxter had rescored any number of AIP pickups from other countries, and for Sadismo he came up with a score that one can only imagine suited the film to a T (for Torture, of course). By the time of Sadismo, Baxter, who was born in 1922, had already achieved some major successes in his career: In 1950 he began arranging and conducting for Capitol Records. He wrote his first film score in 1953 for the sailing travelogue Tanga Tika, but it was his series of hit recordings with his own orchestra that put him on the map  the song from Ruby, The Poor People of Paris, and his classic cover of Alex North and Hy Zarets Unchained Melody. The Poor People of Paris alone sold over a million copies and was Baxters first Gold Record. He then did a series of concept albums featuring his own compositions, with such titles as Ritual of the Savage, The Passions, Tamboo, and Ports of Pleasure  these all did very well and are now considered classics of what has become known as Exotica. All throughout the 1950s Baxter regularly did film scores, including Untamed Youth, Jungle Heat, The Invisible Boy, The Lone Ranger and the Lost City of Gold, The Fiend Who Walked the West, Macabre, and many others. In 1959, Baxter joined up with AIP and began turning out score after score, some for their own productions, and some for the US releases of things they picked up elsewhere  a small sampling includes Goliath and the Barbarians, Master of the World, Reptilicus, Mario Bavas Black Sunday and Black Sabbath, House of Usher, Pit and the Pendulum, The Comedy of Terrors, Tales of Terror, The Raven, Panic in Year Zero, Beach Party, Pajama Party, Beach Blanket Bingo, The Dunwich Horror, Cry of the Banshee  according to Baxter, he never turned anything down and he was one of the busiest film composers throughout the 1960s.

Baxters score for Sadismo is Baxter in full Exotica mode, and he truly puts the mondo in the music  which means you get Yma Sumac-like wordless vocals, you get xylophones and fluttering flutes, weird and wonderful orchestral colors (no strings), exotic and tantalizing themes, and even some bossa nova, honky-tonk, and blues. If you want an eclectic soundtrack, look no further. We feel this is a monumental release if only for the fact that its the first CD called Sadismo. The source material used for this release was the 15ips two-track monophonic music tapes housed in the MGM vaults.

So, get out your rack, your thumb screw, and your iron maiden and prepare to enter the dark corners of this sick world courtesy of the great Les Baxter. Youll be glad you came.