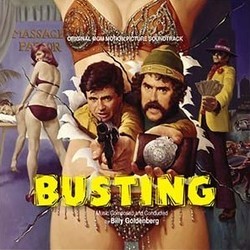 “THE LORD GONNA SMOTE HIS ASS.”

In the 1970s, cop films were all the rage. Busting, made in 1974, was a buddy cop film, with Elliot Gould and Robert Blake as two iconoclastic, laid back, wise-cracking, we’re-doing-it-our-own-way cops. It was Peter Hyams’ debut as a feature film director.

Supporting Gould’s and Blake’s irreverent performances are a crackerjack assemblage of great 1970s character actors – Allen Garfield, great as the bad guy Rizzo, Antonio Fargas, Michael Lerner, Sid Haig, William Sylvester, Logan Ramsey, and Richard X. Slattery. Shot all over Los Angeles, the film is not heavy on plot, but is heavy on atmospheric sequences, all involving Gould and Blake’s rather unorthodox policing techniques, most of which would probably get them landed in the clinker rather than the bad guys. They raid gay bars, massage parlors, entrap hookers – that’s business as usual for them.

For the score to Busting, Hyams chose a composer who was having a lot of success in television, and who had done a handful of films – Billy Goldenberg. In the late 1960s, he began composing for films and television on a regular basis. He provided terrific scores for some great TV series of that era, such as The Name Of The Game, It Takes A Thief, Ironside, and Night Gallery. He also wrote the scores to such films as Change of Habit (with Elvis), and a particularly memorable score to Red Sky At Morning. Then in 1971, Goldenberg scored a classic TV film called Duel for a young up-and-coming TV director named Steven Spielberg. It was a seriously great score and brought Goldenberg a lot of notice. After that, he went on to score the film version of Woody Allen’s Play It Again, Sam, Up The Sandbox (with Barbra Streisand), The Last of Sheila (written by Anthony Perkins and Stephen Sondheim), as well as more TV scores for shows like McCloud, The Sixth Sense, Ghost Story, The Bold Ones, Banacek, Kojak, as well as his groundbreaking work on a little series of mystery movies featuring a rumpled detective named Columbo. He was nominated for many Emmy Awards, winning two along the way.

Goldenberg’s score for Busting is one of his most interesting and unusual – it has some serious funk, some fun source music, some terrific suspense cues, and some very unorthodox (for the time) orchestrations. His music fits the film like a glove – it’s just as sly, irreverent and off-the-cuff as the movie’s sly, irreverent and off-the-cuff protagonists.

For this CD release, we present every cue that Goldenberg wrote for the film. Some of these are dialed so low in the film mix that you can’t even hear them. We’ve assembled the cues in film order, but have consolidated a few of the shorter cues into longer ones for a better listening experience. There were two source music cues that didn’t have cue numbers that didn’t seem to be used in the film (at least that you could hear) – we’ve included those as bonus tracks – one of them has some great funky organ that would have been perfectly at home in any number of blaxploitation films of that decade. The score was assembled from the mono tapes housed in the MGM vault.

There is not nearly enough Billy Goldenberg on CD – and so it is a particular treat to be able to do this wonderful score, and hopefully it will usher in more Goldenberg – he was (and is) a master of his craft and a unique talent.