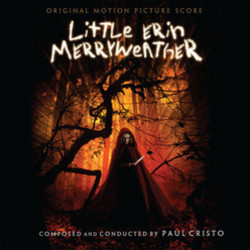 “A flash of RED then thump you're DEAD!” goes the saying around a New England campus. Students mysteriously fall dead to a killer who seems to have been inspired by the tale of Little Red Riding Hood. This is the tale of Little Erin Merryweather (Vigdis Anholt), a doll-like beauty who was abused as a girl and can't cope with the trauma. When honor student Peter Bloom (David Morwick) takes an interest in the murders, he simultaneously gets to know Erin better - but will he escape the fate of his mates or become the next victim of Little Erin Merryweather?

David Morwick's chilling horror story was released in 2003 and has gained a notable cult following since its release. The movie is characterized by stylish photography contrasting white and red colors, memorable artwork connecting the horrors to the fairytale and darkly tragic music by composer Paul Cristo (Species: The Awakening), who wrote his first feature film score to this project.

The score's two key themes focus on the main characters with Erin's motive being particularly memorable as the fragile, childlike heroine is transformed into a merciless killer by certain sights or events. The music was performed and recorded in a Boston chapel by 13 musicians and a 60-member choir, who effectively cover the most emotionally disturbing moments. Our release contains the entire underscore (around 50 minutes of music) newly remixed by top recording engineer Peter Fuchs from the original DAT tapes.
'Little Erin Merryweather' Original Motion Picture Score
Limited Edition of 500 copies
Label: KMRCD 024
Date: 2005
Tracks: 21
Time: 49'23