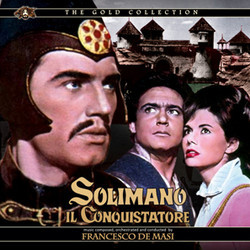 Kronos Records proudly presents for the first time ever on CD one of the most epic, beautiful and bombastic scores by the late Maestro FRANCESCO De MASI : Solimano il Conqiuistatore (Suleiman the Conqueror) the soundtrack for the 1961 Italo-Yugoslavian co-production, directed by Vatroslav Mimica.

After a beautiful 33 rpm records published on the late Franco De Gemini’s Beat Records at the time of the film, the 'Solimano Il Conquistatore” soundtrack appears for the first time ever on CD, completely remastered for the occasion and ready to transport you in the magical epic owrld of one of the wordl's most genial composers ever. MAESTRO FANCESCO De MASI conducts his own work in the maasterpiece. Liner notes courtesy of FILIPPO De MASI , the Maestro's only son who honours us once again with his foreword.