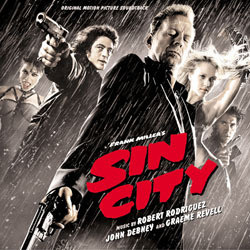 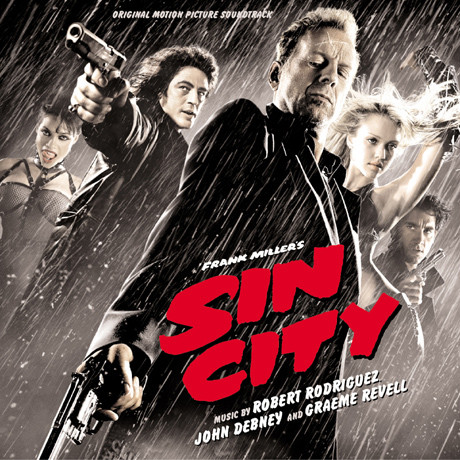 Ukryj recenzje w innych językach
Sin City - 08/10 - Przegląd wersji Adam Andersson, zgłoszone w 2008-01-20 21:25:40 (Język angielski)
Three completely different storylines, only loosely tied together by the fact that they all take place in the same town - can that work as a film? And three different composers scoring each of the three storylines, only loosely basing their music on the same themes - can that work as a score? An impossible mix, it may seem, that could never result in a good movie, or at least not in a coherent one - but be surprised: it did. Robert Rodriguez faithful adaptation of Frank Millers wonderfully dark graphic novel series Sin City is a very well held-together movie, despite its apparent schizophrenia both story and score-wise. The scene of the movie - Sin City itself - gives both film and score the unity it needs and as a whole, Sin City is a film experience that ultimately feels like one story - the story about a town gone bad - a town where everything can happen...

Robert Rodriguez already before filming started to write on the main theme of the film, but as time went by, he realised that he could not score Sin City entirely by himself. So he called in two composers he has worked with before: John Debney (Spy Kids) and Graeme Revell (From Dusk till Dawn) to compose the music for two of the three storylines, while Rodriguez would take care of the third storyline himself, as well as provide some overarching themes for the film as a whole. The collaboration seems to have been a close one, because even if the three parts are different in many ways, they are connected in the very dark character and a modern film noir feel - it is one score, not three, no doubt about it, and within it there is a lot to enjoy. With classic film noir elements such as saxophones and trumpets together with ordinary symphony orchestra accompaniment, as well as more modern elements such as electric guitar, bass and synths, a truly enchanting picture of the darkness of Sin City is painted before us. Indeed, this music is Sin City.

It all begins with Rodriguez exciting main title cue, "Sin City, with saxophone solos over a drum beat and a bass line, presenting the main theme for Sin City. I must admit though that I have a little bit of a problem really identifying this theme, which does not seem to resurface many times either. Nevertheless, the main title sets the tone in an excellent way, and tells you what youre in for: a modern film noir score that is quite remarkable. Rodriguez has opted to use a rather traditional orchestra (though lacking all woodwinds except for the saxophones) for his part of the score, and the same goes for Debneys part - in terms of instrumentation, Revells part is the really interesting one. Revells score begins in the third track of the CD, and while being in the same overall tone as both Rodriguez and Debneys music, it is apparent from the start that this is something special indeed. With saxophone and trombone solos, female voice and synths (percussion as well as other synthesised instruments) Revell creates an incredibly low and to me very exciting score for his episode. It is filled with clanging, metallic synthetic sounds, underlined by more ordinary percussion and bass, with sax and trombone solos taking the lead. Two notable themes unify the episode: a low sax theme for the storylines protagonist, Marv (Marv), and a haunting female vocal motif for the woman he sets out to avenge, Goldie (Goldies Dead). Especially this vocal motif is notable when it appears in the midst of the harshness of the other music, like a vague remembrance of something that once was. Revell must be commended for his treatment of the thematic material here  it is impressively done, and a treat of this score.

Debneys episode is more of classic film noir scoring, so to speak, with its use of an ordinary orchestra with saxophone and trumpet solos. It has a modern touch with a lot of percussion and synthetic sounds though, and merges well with Revells preceding cues, as well as with the following music by Rodriguez, which is rather similar to Debneys in many ways, even though Debney more clearly turns to the classic film noir feel with his long, dark lines in both sax, trumpet and strings. Debney also uses a strong theme (once again on sax) for the prostitutes of Sin City, the Old Town Girls, a theme that was introduced already in Revells episode (in Old Town Girls). When characters of the three storylines interact, so does the music, and it is most obvious with this particular theme. This is a nice feature, which helps give the three storylines a feeling of unity. Debneys part culminates in The Big Fat Kill, a definite highlight of the score with its dramatic character, culminating in first trumpet then saxophone solos over a string and piano background. A wonderful cue.

After the high mark of The Big Fat Kill, Rodriguez music follows. Frankly, I find that it has troubles reaching the same heights as the preceding tracks, lacking a unifying theme. It remains good noir film music, but comes a little bit in the shadow after Revells and Debneys efforts. But Prison Cell for instance is a brilliant piece, opening with harp arpeggios followed by dark strings and brass. There is less of the electronic percussion and effects in Rodriguez music, and much of it is powerful action music with a lot of brass, while the rest is quite emotional strings and piano music, like Kiss of Death which begins with this emotional piano music and culminates in aggressive brass music. To round things off, there is a great end titles cue - more or less a rock piece that features all the subthemes of the film as well as the main theme which finally gets a thorough reading. Within Rodriguez part there are also two non-original pieces, the rock song Absurd and the classical piece Sensemaya by Mexican composer Silvestre Revueltas. While Revueltas piece fits quite well into the character of the score, since it so obviously has been a major inspiration for Rodriguez music, the rock song feels extremely misplaced in my opinion and disrupts both feel and pace of the score, and should be skipped.

Both Debney and Revell managed well to incorporate their separate parts in the soundscape established by Rodriguez with his main title, and further developed in the final part of the score, and all of it comes off as a unified film noir score, with a very modern feel. The three parts are so stylistically entwined that when listening casually, you will not notice when one composers episode starts and another begins. It is a fact though, that Rodriguez own part is less heavy with the smouldering saxophones of the main title that both Revells and Debneys, and in parts it feels as if Debney and Revell actually did a better job in merging with the style of the main title than Rodriguez did himself. Rodriguez part is still very film noir in its feel though with the piano writing, but is clearly more influenced by Revueltas Sensemaya than any traditional film noir scoring. In the end, Debneys part is the one that comes across as the most well-written music, especially The Big Fat Kill, but actually in my mind Revells part is what stays the longest, with its interesting instrumentation and great thematic treatment.

Although probably a trait desired of directors and producers, John Debney's generally anonymous musical presence renders some of his soundtrack albums rather forgettable. However, here he absorbs the styles of his co-composers and turns it into something far superior and winds up producing the most engaging and memorable material on the album. Old Town sees Debney combining racing percussion, seedy sax and strings into a dizzying musical concoction and adding barking horns to the mix in Deadly Little Miho is equally effective. Tar Pit is a more anguished slice of drama and the crazy saxophone of Jackie Boy's Head is thrillingly breathless; Debney is, if nothing else, a consummate craftsman and this adds considerable impact as, by this point, Revell's industrial percussion alone might have started to wear a little thin. Having said that, after the horrible Absurd by Fluke, three fine cues by Rodriguez appear in succession, notable That Yellow Bastard which contains some fine action scoring.