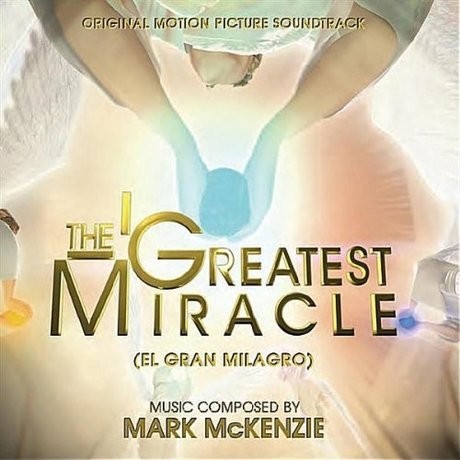 Pokaż recenzje w innych językach
BUYSOUNDTRAX Records presents the original soundtrack to THE GREATEST MIRACLE, also known as EL GRAN MILAGRO, featuring music composed by Mark McKenzie (THE ULTIMATE GIFT, BLIZZARD, DRAGONHEART: A NEW BEGINNING) for the 2011 3D animated film produced by Dos Corazones Films, directed by Bruce Morris (HERCULES, POCAHONTAS, FINDING NEMO) and written by Luis De Velasco .
THE GREATEST MIRACLE is an animated film that tells the story of three characters who are facing different struggles in their life and how they find solace, love, hope and redemption through a series of mysterious encounters that take place during a beautiful Cathedral morning Mass.

The music for THE GREATEST MIRACLE was composed for large symphony orchestra and choir and mixed on the famed 20th Century Fox Newman Scoring Stage in Hollywood. The orchestra and choir material is supplemented by pre-recorded piano, pipe organ, celesta and various percussion tracks. All of this is augmented with a large choral contingent, including a 32-voice mixed choir, 24-voice women s choir and the acclaimed 17-boy soprano ensemble Libera. The final result is a rich, harmonically colorful composition that radiates a palpable emotional depth.

The positive elements expressed within the film immediately appealed to composer Mark McKenzie and his own personal religious faith, which resulted in composing heartfelt music of sublime passion and beauty that is captivating regardless of the listener s persuasion. Like the finest film scores, his music for THE GREATEST MIRACLE transcends its visual counterpart to exemplify the shared need for meaning and acceptance that lies within each of us. Mark McKenzie s gift for melody, color and harmonic sensitivity as well as the profound emotional and spiritual elements in his writing made him the perfect choice to compose the music for THE GREATEST MIRACLE.

Mark McKenzie received his Masters and Doctorate in Music Composition from USC after studying with composers Pierre Boulez, Witold Lutoslawski and Morten Lauridsen. During his formal training, Mark was recognized with the prestigious Hans J. Salter Composition Award, The Norman Cousins Award and ultimately was honored as the USC Outstanding Doctoral Music Graduate. After briefly teaching at USC, he turned his interest towards film and began composing and orchestrating on a wide variety of scores.

As an orchestrator, McKenzie has worked with composers such as John Barry, Bruce Broughton, Danny Elfman, Mark Isham, Jerry Goldsmith, John Powell, Marc Shaiman, Alan Silvestri and John Williams, helping to flesh out their musical ideas into performances for full orchestras. As a composer, Mark has scored feature films such as SON OF DARKNESS: TO DIE FOR II, WARLOCK: THE ARMAGEDDON, FRANK & JESSE, DR. JEKYLL AND MS. HYDE, THE DISAPPEARANCE OF GARCIA LORCA, DOWN PERISCOPE, MI FAMILIA, DRAGONHEART: A NEW BEGINNING, THE ULTIMATE GIFT, BLIZZARD, THE LAST SIN EATER and SAVING SARAH CAIN, television films such as DURANGO, THE LOST CHILD, SILVER BELLS, IN FROM THE NIGHT and an episode of STAR TREK: ENTERPRISE from the second season.

Previously released digitally on iTunes, BUYSOUNDTRAX Records now presents the original motion picture soundtrack to THE GREATEST MIRACLE for the first time on compact disc, which includes additional music exclusive to this release. The booklet features notes by author Randall Larson, including an afterword by the composer and the music has been newly mastered for the highest fidelity by James Nelson of Digital Outland.