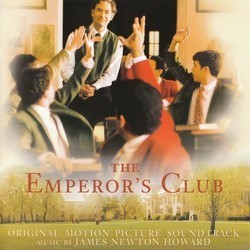 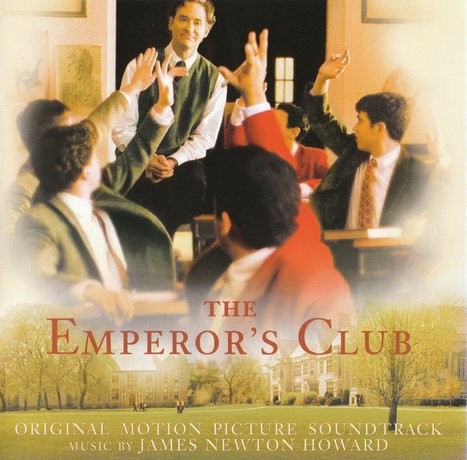 "The Emperor's Club" is rustige en heerlijk romantische score met een hoog blij gevoel-status. James Newton Howard weet te overtuigen en ook al is dit geen indrukwekkende score als "Atlantis the Lost Empire", "Postman" of "Lady in the Water", noch een complexe beleveing als "Snow Falling on Cedars" of "The Village", toch raakt hij de juiste snaar in al zijn eenvoud en emotie. Een heerlijke score voor blije mensen, niet verrassend, wel aangenaam.
The Emperor's Club - 06/10 - Przegląd wersji Tom Daish, zgłoszone w 2010-09-26 20:05:42 (Język angielski)
Thomas Newman's latest effort is a pleasing return to the more tuneful, orchestral style of writing that he... no... wait... sorry, I've just checked the CD and it says James Newton Howard on it. How odd. Sorry. It is true that, The Emperor's Club does owe rather a debt to the Newman sound, particularly the likes of Scent of a Woman and How to Make an American Quilt. The film itself is a sort of updated Dead Poets Society with a twist, starring the ever reliable Kevin Kline as a teacher trying to reform an unruly student. I can't say this kind of college drama has ever appealed to me much, but with Kline in the lead role, I may be tempted.

For a film that appears to be quite serious and dramatic, James Newton Howard's score is for the most part somewhat light and airy, although for all the suggestion of his mannerisms, the orchestration is perhaps a touch more solid than Thomas Newman would have scored. It is quite interesting hearing little bits of both composers' musical identities coming through, there are very obvious Newman harmonic and melodic twists, but there are still plenty that are typical Howardisms. Although a less direct link, the score does share the ticking rhythms of Jeff Beal's marvellous Pollock, even if there is less rhythmic invention. Two early highlights in this vein are the Teaching and Quiz Montages which bounce along pleasingly in the way that all music for montages seems to do, making good use of an acoustic guitar obbligato.

Despite crediting what seems like enough musicians to perform Wagner, the emphasis is on strings and woodwind, although Howard does throw in the occasional trumpet and piano solo over the top. Quite when the four trombones appear I am not entirely certain, although the horns do add a hint of nobility on a couple of occasions. I suspect that Howard suffered from a wee bout of temptrackitis during the composing and for that I can forgive him - the Newman SoundTM seems to have become the default style for almost all post American Beauty dramas. The results here are admittedly quite pleasing, Howard is good enough a composer to exceed the limitations, even if the result isn't as good as its antecedents.
The Emperor's Club - 08/10 - Przegląd wersji Andreas Lindahl, zgłoszone w 2008-01-20 21:25:40 (Język angielski)
I love scores like James Newton Howard's for The Emperor's Club. Scores that are melodic and very lyrical, rather simple in their construction and development, quasi-classical sound, with lush strings and lots of solo performances by various instruments. Feel good scores. Just love 'em.

The score for The Emperor's Club may not be the most original score ever composed (and the film it's written for isn't exactly original either) but that's not the point or what's important. At least not for this score. What's important is that the score is beautiful and a darn nice listen. And it really is. From the opening "Main Titles" and its infectious optimistic strings, horn and oboe to the marvelous final track, "Young Martin Blythe".

The main theme is lyrical, nostalgic and oh so lovely. It goes through several variations throughout the score. Mostly when it comes to orchestration. Strings, solo guitar, solo piano, full orchestra, horn. And solo oboe. I think I could write an entire essay about how much I love the sound of the oboe. But I won't because I'm tired. So I'll just say this: There are oboe solos in The Emperor's Club. And they're great. There's also some writing for the dulcimer, which gives parts of the score a very folkish and pastorale sound. Which works really well.