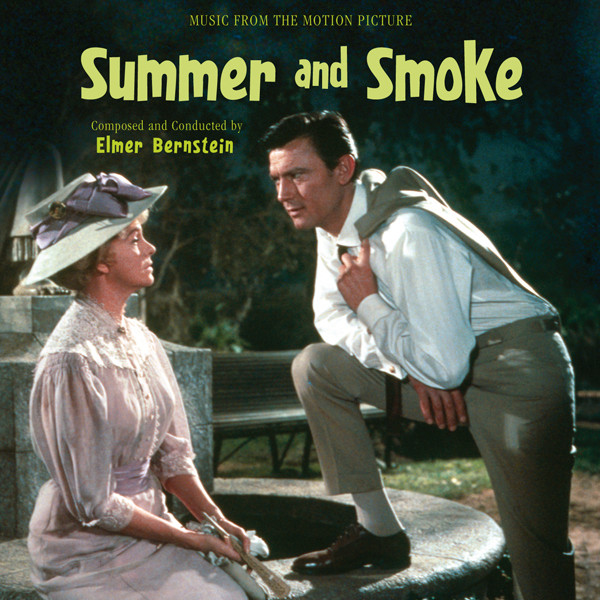 Kritzerland is very proud to present its 100th CD release: A limited edition soundtrack and the world premiere release of the complete score to:

SUMMER AND SMOKE
Music Composed and Conducted by Elmer Bernstein

Tennessee Williams was already a legend when Summer and Smoke premiered on Broadway on October 6, 1948, thanks to the huge success of his play The Glass Menagerie and, more importantly, A Streetcar Named Desire, which had opened the year before Summer and Smoke and become a sensation with critics and audiences and catapulted Williams into the playwriting firmament. Summer and Smoke failed to ignite the same kind of heat as Streetcar and closed after only 102 performances at the Music Box Theatre. However, the play was revived a mere four years later, this time off-Broadway at the then-new Circle In The Square Theater, directed by Jose Quintero and starring Geraldine Page. That production was a big success for Page and Quintero and the play. Nine years later, Summer and Smoke was brought to the screen by Paramount Pictures, with Geraldine Page recreating her stage success as the spinster Alma Winemiller. Peter Glenville directed the film from a screenplay by James Poe and Meade Roberts. Starring opposite Page was Laurence Harvey, along with a wonderful supporting cast that included Rita Moreno, Una Merkel, John McIntire, Thomas Gomez, Pamela Tiffin, and Earl Holliman.

The film received excellent reviews and Page’s brilliant performance was universally praised – she was nominated for an Oscar in the Best Actress category. Una Merkel received a Best Supporting Actress nomination for her performance as Page’s dotty mother, and the film also picked up nominations for Best Art Direction – Best Set Decoration, and another for Elmer Bernstein’s incredible score.

Summer and Smoke is one of Bernstein’s greatest scores in a career that is jam-packed with great scores like To Kill a Mockingbird, The Magnificent Seven, Birdman of Alcatraz, Walk on the Wild Side, The Great Escape, Love With the Proper Stranger, Airplane!, Ghostbusters, and so many others. Bernstein captures every emotion, every subtext, every character – the loneliness, the longing, the yearning, the repression – it’s a textbook example of what great film scoring is all about. His main theme is one of his most haunting and beautiful – a swirling, sinuous, delirious melody that recurs throughout the score. His score brilliantly evokes a different time, place, and world, much like his score to To Kill A Mockingbird, which would follow a year later – a world belonging to one of the great poets of American drama – Tennessee Williams. And a world perfectly captured by Elmer Bernstein’s timeless music.

Summer and Smoke was originally released on an RCA Victor soundtrack LP. That LP contained approximately thirty-six minutes of music, including some heavily edited versions of cues. For this first-ever release of the complete score, we had access to two rolls of 1/2’’ three-track masters that were sent by Paramount to RCA Victor at the time of the film’s release. Those masters were used to assemble the LP, but happily contained all of the cues that were not used on the album. In those days, to assemble the LP they simply edited the three-track masters – thankfully, all the edited out bits were kept and put at the end of the reels. It was simply a matter of putting them all back where they belonged to make the cues once again complete. For reference, we also had the complete scoring sessions archived from 35mm scoring mag on 2’’ tape in the Paramount vaults. The LP program was released on CD by RCA Spain, taken from a sub-master that simply did not sound very good, so this is not only the first release of the complete Summer and Smoke, it is the first time it is being released from those original, superb-sounding three-track tapes.

We have put the score in film order, which is how it plays best. Because all the Glorious Hill band music is used in short versions throughout one sequence in the film, we decided to include those other tracks in the bonus section, as it did not make for a good listening experience to have them all lumped together in a row. Additionally, we have included a source cue and the original LP edited cues in the bonus section. The CD contains over seventy-seven minutes of one of Bernstein’s most ravishingly beautiful scores.

This release is limited to 1500 copies only.