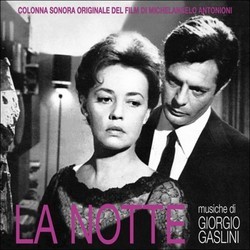 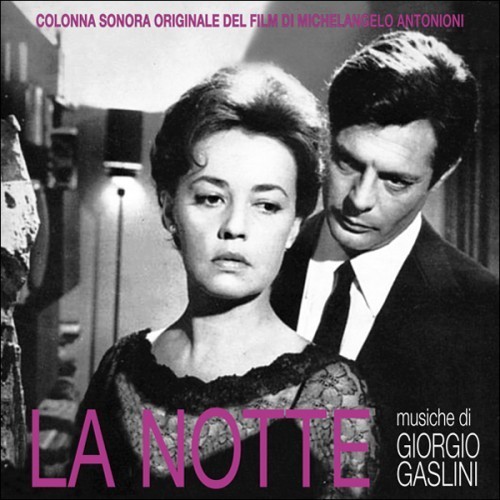 Critically-acclaimed as an true masterpiece in film history, Michelangelo Antonioni´s perplexing, atmospheric and enthralling movie (starring Marcello Mastroianni, Jeanne Moreau and Monica Vitti) is the second entry in his famous “alienation trilogy”. For both the first (L’Aventura) and the third (L’Eclipse), Antonioni’s composer-of-choice was Giovanni Fusco. However, “La Notte” was scored by renown jazz and contemporary music composer Giorgio Gaslini who, thus, was offered a first chance to write music for a film.

Since the film was shot in Milan, Antonioni’s initial idea was to hire a native composer as he was of view that there was a big difference between the jazz music that was being produced in the South and in the North of Italy.

Gaslini wrote his score while the film was being shot: he participated with his own orchestra in the party that serves as a background for the film. According to his recollections this ended up being the most bizarre and exciting experience of his career. The end result is fairly unique as well: a catalogue of ambience jazz music that boasts an unprecented phsycological thrust.

Initially released in a 1960 EP with only 4 cues, the original score remained unavailable until 1996 when the Japanese label SCL issued a limited album that quickly sold out and became part of every fans’ wish-list. The Japanese CD features 10 original tracks plus a 20-minutes suite comprising several alternates, outtakes as well as some previously unreleased tracks, all of which created some confusion. For this new release, remastered and restored by Claudio Fuiano, we have been fortunate enough to be granted access to the original recording sessions tapes vaulted in Cinevox files in Rome, with a warm monaural sound. The outcome is a musical legacy of one of the most important movies in his most complete presentation to date.

The 20-page booklet full of stills and liner notes by Miguel Angel Barroso and Gabrielle Lucantonio, including a exclusive interview with Maestro Gaslini, made for this release.