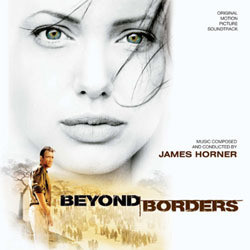 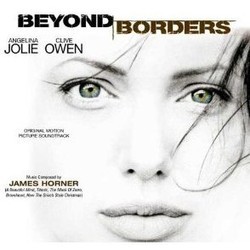 Verberg reviews in andere talen
Beyond Borders - 08/10 - Recensie van Andreas Lindahl, ingevoerd op 2008-01-20 21:25:40 (Engels)
One is rarely surprised by a new James Horner score these days. We often know what to expect, and often the result isn't that far off, when it comes to the actual style and scope of the score. But this is not the case with Beyond Borders. Written for a love story taking place in various war ridden parts of the world I have to admit that I expected a large score, epic in size and sound, i.e. the kind of score Horner has done so many times before and which I'm frankly starting to get a little tired of. Been there done that. That sort of thing.

But Beyond Borders is, surprisingly a rather restrained, intimate score - exactly the type of score Horner often does very well, since it allows him to focus on the characters instead of competing with sound effects or trying to give a movie at least a tiny bit of emotional depth by writing over the top, sappy music for a story nobody cares about.

Beyond Borders takes place in Ethiopia, Cambodia and Chechnya and Horner decided to give each setting its own sound, while still sharing the same basic ideas, orchestrations and mood. Horner also chose to present his music on CD in a rather interesting way. There are no track titles, but three different suites, each with four parts. The four Ethiopia cues open the disc, with exotic percussion and flutes, synths and a rather upbeat presentation of the score's main theme, performed by children's choir, backed up by African voices, shakuhachi, percussion and Kena. It's followed by a longer portion of African solo vocals, performed by Caseline Kunene, supported by ambient synths. The final Ethiopia track also introduces the listener to the score's most beautiful theme; a waltz-like, nostalgic melody performed by a lonely piano, and later taken over by electronics, kena and woodwinds. This is what Horner should do more often! It's fresh, it's beautiful and it's really good.

Beyond Borders is a score which features a great deal of electronics, something which is rather unusual when it comes to Horner's later efforts. Of course, he's written scores such as Where the River Runs Black and The Name of the Rose which are more or less entirely synthetic, but never before has Horner mixed acoustic instruments with digital ones like this. And I like it. It does, however, get a little too far and a little too annoying in a couple of cues, such as the almost ten minutes long Cambodia II, which is littered with interesting beats, samples and strange sounds, but which unfortunately doesn't really go anywhere. And it's somewhat noisy, too. But this cue is pretty much the only thing in this score I don't like (well, apart from some similar music in one of the later tracks, that is...) and the rest of Beyond Borders is a charming, intimate and restrained score.

The final "suite" on the soundtrack is also the best one. The Chechnya cues gives the thematic material a rather Russian, folksy twist and the result is some rather wistful music. The ethnic instruments are used to great effect and creates, together with the regular orchestra, piano, guitar and synths a sound we really haven't heard from Horner before. There's also a beautiful performance of Robert Schumann's piano piece Traumerei, before the final track reprises the two major themes. The rendition of the secondary waltz-like theme is especially worth mentioning. It opens the cue and is one of the highlights of the CD, performed by ethnic flutes, piano, guitar and soft percussion. Gorgeous! Also worth mentioning is some whimsical dreamy oboe solos. And the appearances of the children's choir, of course.