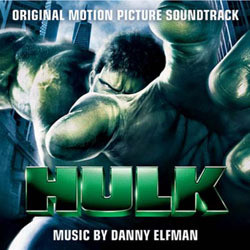 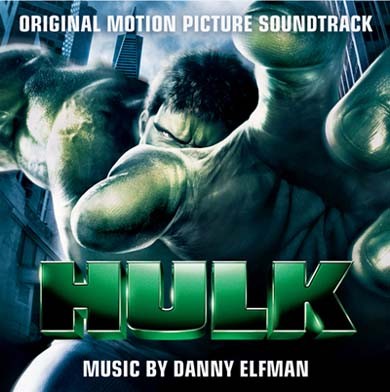 Verberg reviews in andere talen
Hulk - 06/10 - Recensie van Tom Daish, ingevoerd op 2010-09-10 23:40:02 (Engels)
It's quite amusing how fan opinion changes on composers and Danny Elfman seems to suffer more than most in this regard. Ten years ago, most would be clamoring for him to do anything vaguely superhero or comic book related, but now his name connected to such a project seems to elicit a groan of discontent. For my money, Spider-Man was one of the finest comic book movie scores of recent times and certainly not deserving of the endless criticism in received. Had the score for Spider-Man been more like that he has written for Ang Lee's big screen version of The Incredible Hulk then I'd be more inclined to agree with the complaints. This is not to say that Hulk is a bad score, but rather like Red Dragon, it feels much more like Elfman on autopilot, treading well worn ground and the more inventive parts a little incongruous..
The biggest complaint against Spider-Man was that it didn't have a good main theme, an opinion I find a nonsense, but for Hulk, I would have to admit that the theme isn't anything special. It certainly doesn't have the same emotional resonance as Joe Harnell's simple, but affecting theme for the TV series. Given Lee's approach to the material, I would expect a certain duality to the melody; a sense of isolation with an inner fury. Maybe that seems too simplistic and literal, but at least it would somehow represent the character. As it stands, the melody just sounds like Danny Elfman, slightly down beat comic book theme #6. It's not bad or even unmemorable (although it's far from even halfway classic), it's just disappointingly indistinct, both musically and emotionally. John Ottman's X-Men 2 theme had the same problem, but with a composer of Elfman's calibre, expectations are higher.

Of course scores don't absolutely require brilliant thematics to sustain them and fortunately, there are several decent passages which more eloquently describe the emotional core of the film. Dad's Visit and Father Knows Best being cases in point, where Elfman's writing is touching, but laced with detachment and despair. Possibly as a result of Mychael Danna originally being asked to pen the score (my guess is that the studio got cold feet as Lee has worked with Danna previously) and his fondness for more exotic tonalities, there is a slightly unexpected eastern edge to a few of the tracks with Natacha Atlas' vocal warbling that, when during the more exciting moments, slightly recalls the vocals in Horner's The Four Feathers. There is not meant to be any location implied, but the connotations are hard to deny and while they increase the musical palette somewhat, they seem unnecessary and a little gimmicky. One of Hans Zimmer's favourite ethnic instruments, the duduk makes a number of appearances, but again, without any real reason for being there.

Of course comic book anti-heroes need action and Hulk has more than a fair share, some of which are very much in the Planet of the Apes style - a few moments disturbingly so - and several that have an interesting edge because of the vocals, even if it pushes the orchestral mixture toward having too many ingredients. Other moments just feel like Elfman thrashing around with the orchestra and not accomplishing much. The album closes with a song by members of Guns 'N' Roses which seems like a pretty decent rock song to me, with more focussed aggression and energy than much of the score. As mentioned above, Hulk fits alongside Red Dragon as a score that has its moments and plenty of Elfman style, which is almost always of interest and worth hearing, but compared to his other genre efforts, it comes across as a slightly below par effort.
Hulk - 08/10 - Recensie van J , ingevoerd op 2008-01-20 21:25:40 (Engels)
Composer extraordinaire Danny Elfman continues his mean streak of big name films with Ang Lee’s The Hulk. After Mychael Danna, a long-time collaborator of Lee’s, was fired Elfman was called in to fill the void. Given only three weeks to write over two hours of score, Elfman was further pressured by the heavy demands of Lee to continually reinvent his sound. Compromises were made, and Elfman made an effort to integrate Danna’s own world music approach to his own work. Don’t get your hopes up, those seeking a return to Elfman’s glory days will find no such thing here. What you will find is a rhythmically experimental and musically complex listening experience much akin to Red Dragon and Spider-man.

As usual, Elfman trudged through the experience, providing a score that served the film on-screen in the very best ways. Bruce’s recollection of his past is given weight by the vocals of Natacha Atlas (“The Truth Revealed”), Bruce’s romance with Betty Ross is granted sensitivity by the use of ethereal woodwinds (“Betty’s Dream”, “The Phone Call”), and Bruce’s transformation into the Hulk is given urgency and panic by a frantic six-note string motif (“Main Titles”, “…Making Me Angry”). A grander and more immediately recognizable version of this motif is adapted and used to accent Bruce’s father’s obsession with his creation—which is the Hulk itself. This “theme” is heard instantly at the start of the album in “Main Titles”, and sounds exactly like the sort of thing that would flow through the mind of a demented scientist. So, to answer one question, there is no heroic theme for the Hulk. After all, he is not a super-hero.

The Hulk could best be described as a more coherent version of Planet of the Apes. Remember how messy some of those action tracks sounded? Well, the action cue presented here have a much more logical flow to them. In fact, “Hulk Out!”—a major highlight—features some of the all-out ballsiest stuff Elfman has pulled in a while. After “Hulk Out!” (only track 7 out of 18) the action cues never really reach back that level of intensity that should come from the rowdiest of Marvel’s creations. “Hounds of Hell” is OK, and the first minute of “Hulk’s Freedom” simply soars with an excellent beat, brass calling, and Atlas’ vocals making their last grand appearance on CD. “Captured” is a big surprise. Chronicling the transport of an unconscious Bruce Banner across miles of desert landscape by military helicopters, this is very reminiscent of something Zimmer could pound out in on one of his best days, but Elfman’s use of brass give it his own unique edge.

Decca has once again provided a healthy amount of score, 63 minutes of it in fact, but the problem is the selection. Personally, I was shocked to find that over ten minutes of music that was featured in the film’s finest action moments were not present of this release. Why this decision was made, I haven’t the faintest clue. While extended, heavily dramatic cues such as “The Truth Revealed” are a relief in such a heavy score, I am sure that I speak for others in questioning why such excellent action material was discarded. Surely, “Set Me Free”, a poor excuse for audible listening, had something to do with it. The fact that this four-minute monstrosity was chosen over more action cues succeeds in making me cringe.