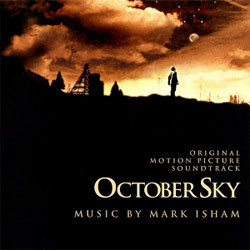 Verberg reviews in andere talen
October Sky - 06/10 - Recensie van Andreas Lindahl, ingevoerd op 2008-01-20 21:25:40 (Engels)
October Sky is a charming and touching "based on a true story" film about Homer, a young boy growing up in the mining town Coalwood in the 1950s, who instead of accepting a future as a miner, just like his dad, dreams of a career as rocket scientist at NASA. Directed by Joe Johnston, many expected James Horner to score this film, but for some reason the job went to Mark Isham instead. Chances are that James Horner would have written a wonderful score for October Sky. This is exactly the kind of film he seems to do best - small, quiet dramas, such as The Spitfire Grill - and it is really a pity that he didn't score this one. However, Mark Isham's score is far from bad.

With Coalwood being a small, sleepy American town it doesn't come as a huge surprise that the music is filled with Americana, warmth and intimacy, with orchestrations dominated by strings, woodwinds and violin solos. Overall, the orchestral sound is very small and sometimes almost fragile. The same goes for the main theme, which is nostalgic and actually quite depressing, but a little weak.

The score works great in the film, but on CD I find the score to be a little too slow and depressing for my taste. Even if cues such as the upbeat "The Search for AUK 13" make the score a little more interesting it is generally too restrained and repetetive, with slow string phrases that don't seem to go anywhere. It's really only in the closing score cues, where Isham really lets the orchestra soar, that the music gets really interesting.

Also included on the soundtrack CD are seven songs from the 1950's. Classics such as "Yakety Yak" by The Coasters can be found and they are generally good, but as they appear all over the CD they interrupt the flow of Isham's score, and are therefore more distracting than entertaining. I don't know, but I would probably appreciate this score more without the songs.
October Sky - 10/10 - Recensie van Maya Butler, ingevoerd op 2005-03-22 00:24:15 (Engels)
I love the October Sky soundtrack. It brings out the emotion and drama in the scenes. Nothing else could do better!
De trailer van deze soundtrack bevat muziek uit: