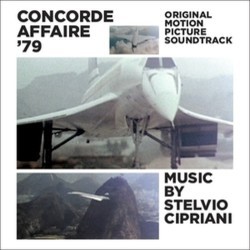 There was a time not that long ago when the film music of Stelvio Cipriani was seriously underrepresented on CD. The past decade has seen that error wonderfully resolved, and thankfully the flood of titles continues with this latest from Chris Soundtrack Corner. CONCORDE AFFAIRE 79 is a 1979 film directed by Ruggero Deodato, the controversial auteur behind the infamous body-horrors precursor to todays torture porn, CANNIBAL HOLOCAUST. And just as CANNIBAL HOLOCAUST elicited a distinguished and unforgettable score from Riz Ortolani so too did the same directors CONCORDE AFFAIRE 79 inspire Cipriani to give the world a quite exceptional soundtrack. Although primarily monothematic the complete score  here available for the first time  demonstrates just how fruitful and versatile the melodic / motif driven approach of the late Silver Age truly was. Ciprianis foundation premise of a frenetic chase theme for full orchestra is impressively morphed into a dizzying array of ideas  a truly rich tapestry of textures, impressions and mood are presented in the 27 tracks of this CD. As Deodatos CONCORDE is essentially the last of the so-called disaster epics it strays from the originating principle of the genre and is a hybrid; more of an investigative thriller than disaster film. Cipriani addresses this by boldly infusing his familiar, highly melodic and adult-pop driven demeanor with synth flourishes that border on tropes more common to science fiction. Because of this the various themes and variations create a brand new sensation for the seasoned film score connoisseur. CONCORDE AFFAIRE 79 should be considered a rare treat and an exciting and successful experiment: an attractive, glamorous orchestral score with a fluent blending of paranoia and icy, hallucinogenic fear making for a delightfully idiosyncratic lounge-style cocktail! This particular CD release will most likely remind all of us of just how flagrantly entertaining and fun film music used to be.