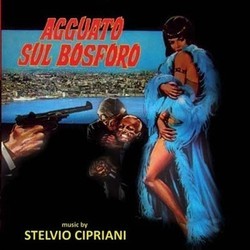 AGGUATO SUL BOSFORO (aka COLPO GROSSO A PORTO SAID) is a spy movie directed in 1969 by Luigi Batzella (with the pseudonym of Paull' Hamus)and starring David Allen, Eleonora Vargas, Kathia Kelly, Livio Lorenzon, Gino Turini, Alfredo Rizzo, Robert King, María Badmajew, Aldo Bonamano, Dom Moor, Osiride Pevarello, Mimmo Poli, Francesca Roy, Claudio Ruffini. A well-known geologist , Professor Hutton , found a diamond of unusual proportions, so much so that the thirty-six fragments resulting from the processing of the main stone , used for a ring, up from just a collection of inestimable value. The dark disappearance of the professor sets off a battle between the international underworld to retrieve the ring, take possession of the fragments of diamonds and find the microfilm on which the geologist has established the elements for the identification of the exceptional reservoir. It turns out that the ring is in the hands of the levantine Akim who intends to sell it to his friend Ababisian, while the fragments are to be delivered to Corval, a merchant, who already got the microfilm and is trying to take control of the ring, with the help in Sivas, an employee of Ababisian. Marcel, Mark and Martin, three private investigators appointed to unravel the mystery of the disappearance of Hutton, have the best in the struggle. Though the criminal are defeated, the investigators are unable to prevent the destruction of the precious microfilm, the only trace to find the deposit of diamonds. Though at the beginning of his career, Stelvio Cipriani had already scored several successful films such as THE BOUNTY KILLER, UN UOMO, UN CAVALLO, UNA PISTOLA and the next year he would composed the music for ANONIMO VENEZIANO, his world most famous soundtrack. For this movie, the composer wrote a score based on a romantic classic main theme, alternated with folk music of Middle Eastern flavor, lounge atmospheres given by floor dance tunes for organ, including a captivating Bossa Nova and themes typical of spy genre. This CD recording (TT 43:40) comes from the stereo master tapes of the original recording session, digitally restored and re-mastered.