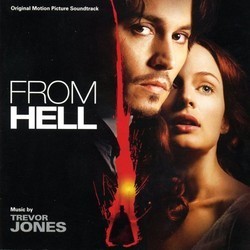 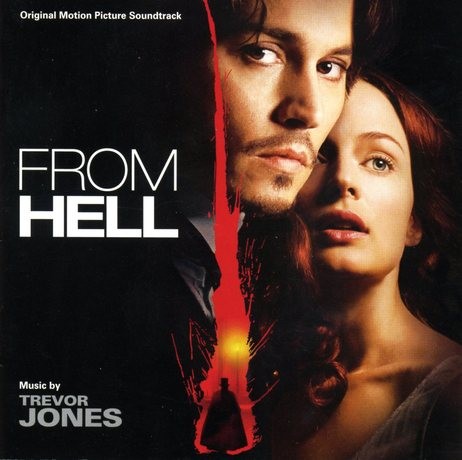 Verberg reviews in andere talen
From Hell - 06/10 - Recensie van Tom Daish, ingevoerd op 2010-09-28 21:38:26 (Engels)
From Hell is a fictionalised account of the Jack the Ripper saga that terrified Victorian London, based on a graphic novel and starring Johnny Depp. It seems an odd choice after his role in Tim Burton's marvellously gothic Sleepy Hollow, where he also plays an investigator in a gloomy period film, although this time the murderer is all too human. In another coincidence, Jones has gone on to score The League of Extraordinary Gentleman, another comic book adaptation in the same period. Unsurprisingly, the tone is dark and unrelenting. It's the sort of score that really does sound as though it could be from Hell, but after the seven impressive minutes of the opening In Memoriam, there's the slightly disturbing realisation that there's still almost an hour to go. In Memoriam is indeed a superb way to start; the first half introduces the broad, but densely orchestrated main theme while the second adds some digital percussion (which works surprisingly well) and a Kilar style chorus. I'm never sure if it's simply the orchestration, the mixing or both, but the density of sound that Jones achieves is impressive, if overbearing after a while.

As this is mainly a detective story, the music is largely low key, which as with his aforementioned League of Extraordinary Gentlemen, turns out to the album's weakness. When it has enough momentum, it works well and cues such as Whitechapel Murders and The Compass and the Ruler are impressive, building towards churning choral passages and some interesting, but entirely satisfying orchestral effects. However, Royal Connections, A Sprig of Red Grapes, Chasing the Dragon etc. are dripping with atmosphere, but lacking in appeal or interest. Of course, there are some exceptions and Portrait of a Prince is quite lovely, plus shows a flicker of light in amongst the gloom; its setting in slightly higher registers and a thinning of the orchestral texture helps immensely. The only extended action sequence is Death Coach and Jones doesn't disappoint, combining a deep chorus and a surprisingly sparse orchestral texture, but one that works well. The finale, Pennies for the Ferryman has a similar tone to Portrait of a Prince, but has a broader feel and greater scale, fading into a low sustained note for a sour close.

The album contains two songs that couldn't be further apart in style if they tried. The opening, The Nobodies, a remix of a Marilyn Manson song, is heavy metal and isn't to my taste at all, neither is the closing Bow Belle. The latter is a fake period song by Jones, made to sound as primitively recorded as possible, the sort of recording you get from the very first wax cylinders. It's not pleasant to listen to in any real sense and is best avoided. Despite some fine moments and superb playing from the Academy of St Martin in the Field (with Sir Neville Marriner is nowhere to be seen), From Hell is just too long and at times does seem to go on forever. Still there are enough highlights to make it worth recommending, but patience is required to get through the entire album to find them all.
From Hell - 06/10 - Recensie van Andreas Lindahl, ingevoerd op 2008-01-20 21:25:40 (Engels)
I'm a huge Jack the Ripper fan. No, not that kind of fan! I find this mystery very interesting and have a large number of Ripper books. Some of these books, although not that many, such as Philip Sugden's "The Complete History of Jack the Ripper", presents the entire case, based on available, real evidence. These are the good ones. And then there are horrible books, such as Patricia Cornwell's recent "Portrait of a Killer: Jack the Ripper - Case Closed", that one can only laugh at. Alan Moore's graphic novel From Hell is somewhere in the middle. It's a nice piece of work but is a large mix of various Jack the Ripper theories. The film adaptation of the novel takes also a great deal of liberties when it comes to available evidence and incorporates the Freemasons and the Royal Family into the story. Rather messy, actually. It's an entertaining film, with amazing sets, but whatever you do, do not choose to believe that this is what actually happened in London's Whitechapel district in 1888. And no, I am quite certain that prostitutes in London at the end of the 19th Century did not look nearly as healthy as Heather Graham.

Trevor Jones' score for the film is incredibly dark and depressing, with orchestrations focusing on mostly dark strings and electronics. It's not an easy listen and with a running time of over 70 minutes it's actually a little too long for its own good. The first score track on the disc, "In Memoriam", is one of the scores nicer parts, with a nice rendition of the long, beautiful main theme, with some nice writings for choir and strings. But after that track the darkness takes over the stage entirely.

Of course, one cannot expect a score for a film about Jack the Ripper to be lighthearted and optimistic in any way. But From Hell is just too dark. It's dark and brooding music actually gets a little overbearing at times and even if typical Jones-ish action tracks such as "Death Coach" and more beautiful tracks, like the closing "Pennies for the Ferryman", create some diversity From Hell is too repetetive to be entirely enjoyable. Trevor Jones is an excellent composer, and his score for From Hell works great in the film, but on CD, well, it just doesn't work that well.