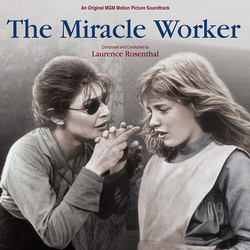 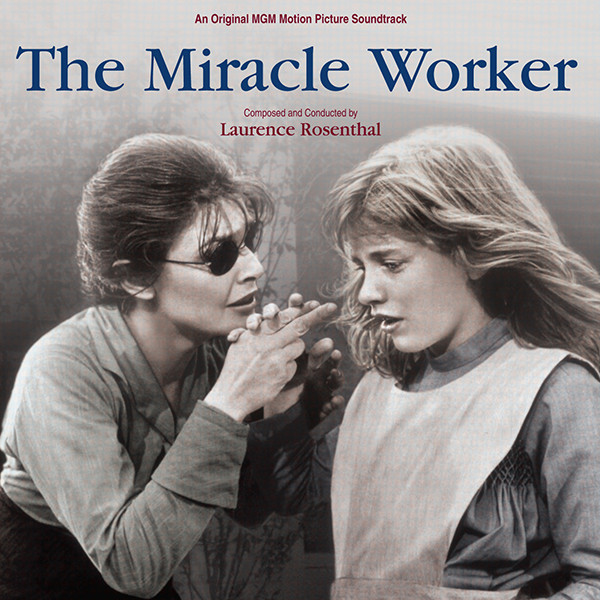 Kritzerland is proud to present a limited edition soundtrack CD:

In 1962, the Broadway hit The Miracle Worker came to the screen, written by the play’s author, William Gibson, directed by Arthur Penn, who helmed the play, and starring Anne Bancroft and Patty Duke recreating their stage roles. The film was a hit with critics and audiences. The Miracle Worker was and is a brilliant movie, with two of the greatest female performances ever captured on film. The Academy Awards thought so, too, rewarding Anne Bancroft and Patty Duke with Oscars for Best Actress and Best Supporting Actress (at the time, Duke was the youngest actress to ever win the award). Penn and Gibson were also nominated (but didn’t take home the prize), as was Ruth Morley for her costumes (she didn’t win either). Not nominated at all was the film’s composer, Laurence Rosenthal. One can’t really argue with the five choices that were made for best original score that year – they included Maurice Jarre’s Lawrence of Arabia (the winner), Bronislau Kaper’s Mutiny on the Bounty, Franz Waxman’s Taras Bulba, Jerry Goldsmith’s Freud, and Elmer Bernstein’s To Kill a Mockingbird – great scores all. But they should have created a sixth slot for Rosenthal, because his music for The Miracle Worker is a true masterpiece of film scoring.

Rosenthal’s score for The Miracle Worker is, to put it plainly, a miracle. His grasp of what makes The Miracle Worker tick and his ability to capture that in musical terms is uncanny. Beginning with the haunting main title as we meet Helen Keller and enter her dark world, and continuing through a series of cues that capture every nuance of character and drama – never overstating, always illuminating, and ultimately as moving a score as has ever been written. There are no words that can capture what Rosenthal achieves in the film’s penultimate cue, “The Miracle/The Keys,” other than to say it is one of the greatest fusions of image and music and emotion ever created. It is the key reason that sequence is one of the most emotional ever put on film – there is never a dry eye as the music swells and Annie Sullivan shouts, “She knows, she knows.” It is one of the greatest moments in all of film.

The Miracle Worker has been released twice before on CD – once on a composer promo and once by Intrada. The latter edition sold out very quickly. It’s always a tough call when doing a rerelease of a limited edition title, but in the case of The Miracle Worker there was no question – the music deserves to be heard by the widest audience possible and because of its quick sellout it never really had a chance beyond the film music collector market. For this release, we have done what we hope you’ll agree are some improvements to the sound. The previous releases both had kind of a reverby faux stereo spread that wasn’t part of the original session sound - we’ve gone back to the basics as there was nice room ambience in the original recordings and the score takes on a more immediate sound without the extra reverb. On the previous releases there was a tape crimp problem in the opening notes of the main title – we’ve happily fixed that, and we’ve fixed a few other dropouts and other anomalies. Also, we include two bonus tracks that were not on either of the previous CDs. Unfortunately, the sound is not optimal for the bonus material, but we felt that the music is so good in those two cues (one of which, as you’ll hear, was either rescored for the film or put together for the film as it differs from the originally recorded cue) that we hope you’ll forgive the not-so-hot sound on those two cues just to hear more of this incredible score.

For anyone who’s seen The Miracle Worker, the film is indelibly etched into memory – those performances, that direction, and that amazing score by the amazing Laurence Rosenthal.

THE MIRACLE WORKER is limited to 1000 copies only.