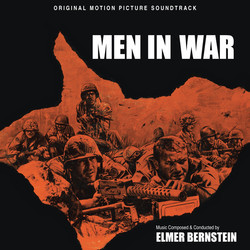 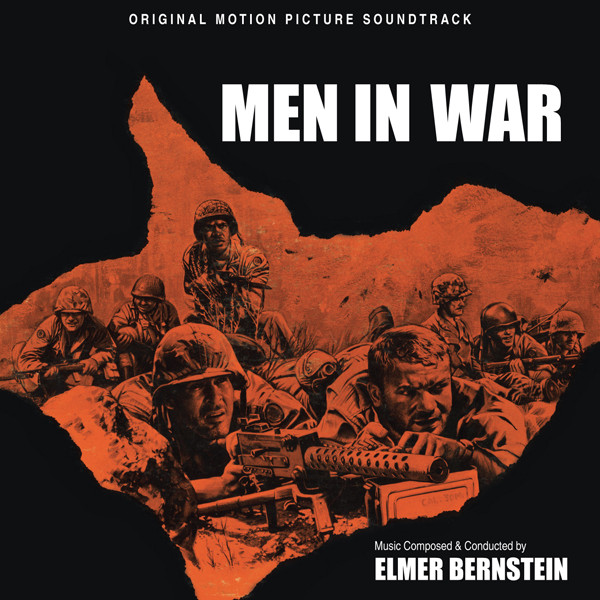 MEN IN WAR
Music Composed and Conducted by Elmer Bernstein

Men In War is a terrific movie directed by Anthony Mann (El Cid, The Fall Of The Roman Empire, Winchester Æ73, The Naked Spur), and starring Robert Ryan and Aldo Ray. It takes place in one day, September 6, 1950 during the Korean war, as we follow a platoon of bone-weary foot soldiers whoÆve been cut off from their division. Without radio contact, and with nerves frayed, their leader, Lieutenant Benson tries to get them to a hill where he believes their division is. The film is beautifully written (credited to Philip Yordan and based on the novel Day Without End by Van Van Praag), and beautifully shot in black-and-white by Ernest Haller (all filmed in HollywoodÆs Bronson Canyon). Robert Ryan turns in his usual great performance as Benson, and Aldo Ray as ôMontanaö is also excellent. But every performance in the film is wonderful û Robert Keith is a lesson in great film acting as the Colonel û he speaks exactly one word in the film and thatÆs in the last five minutes, but thereÆs an entire screenplay going on in his eyes. The rest of the supporting cast makes the most of their screen time û Nehemiah Persoff, Phillip Pine, Vic Morrow, James Edwards, L.Q. Jones, and Scott Marlowe all get their moments to shine.

Tying all of its elements together is the fantastic score of Elmer Bernstein. Bernstein did three films for Mann û Men In War, The Tin Star, and GodÆs Little Acre (all three of which have been released on Kritzerland û in fact, with this release Kritzerland has issued the entirety of BernsteinÆs 1957 output with the exception of Sweet Smell Of Success û his four other films that year were Fear Strikes Out, Men In War, The Tin Star, and Drango û all currently available as limited edition CDs), and all three scores are great and all three are completely different. Men In War begins with drums and jagged orchestral stabs, and then it is by turns pensive, intense, propulsive, brooding, and suspenseful as it captures the moods of the soldiers as they trudge on through dangerous terrain, with their tensions at the breaking point.

Men In War was originally released on Imperial Records in mono. There was a release in ôstereoö but it was a weird fake ôstereoö with some sort of spread and trying to shift things into different channels arbitrarily and not very well. Obviously, we are issuing the recording in mono, as it was recorded. The tapes, housed in the Capitol/EMI vaults, were in great condition and the mono sound is full-bodied and crisp, clean, and clear.

This is KritzerlandÆs seventh Elmer Bernstein release, and we would be happy to just keep releasing all of his never before on CD scores. Elmer Bernstein was one-of-a-kind and his music is part of the landscape of cinema.