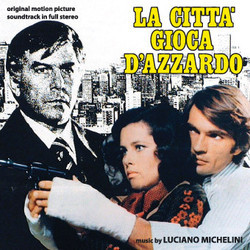 Digitmovies is glad to release for the very first time on CD the complete OST in full stereo by Luciano Michelini for the movie 'La città gioca d'azzardo' (aka Gambling City) which, shot in 1975 by Sergio Martino ('Milano trema, la polizia vuole giustizia', 'La polizia accusa, il servizio segreto uccide'), is marginally part of the Italian police genre. Luc Merenda starred in the role of the nice protagonist with supporting players Dayle Haddon, Corrado Pani and Enrico Maria Salerno. The plot sees Merenda as Luca Altieri, a gambler who is engaged in a club. The owner (Maria Salerno) is the boss of a large ring of gambling houses. Love for a woman (Haddon) torn between Luca and the son of the boss (Pani) will cause a rivalry which leads up to the beating up of Luca and the killing of the owner by the hands of his own son. After having escaped to Nice with the girl , Luca will challenge the cynical killer in a tragic finale. The movie by Martino mixes action with comedy and dramatic genres, in fact this movie is more a noir than a real police movie. This motion picture shot in Milan and Nice can be considered the central part of a hypothetical trilogy about the socio-political facts of the Italy of the 70s that Sergio Martino started with the police movie 'Milano trema, la polizia vuole giustizia', continued with the noir 'La città gioca d'azzardo' and finished with the political 'La polizia accusa, il servizio segreto uccide'. Luciano Michelini (already composer of the OST of 'La polizia accusa, il servizio segreto uccide') has composed a main theme with a burlesque flavour, a little bit retro in a cabaret style which puts well in evidence the Casino ambience and gets reprised with delicious variations (Tr.1, Tr.3, Tr.4, Tr.5, Tr.7,Tr.11,Tr.17,Tr.19, Tr.20). This recurrent motif is alternated with exciting action themes with the Lalo Schifrin sound of Dirty Harry concerning chases and shootings (Tr.6, Tr.8,Tr.9, Tr.12, Tr.16, Tr.21, Tr.22) and with a fabulous duet of piano and sax with an urban flavour in Tr.14. The author has written a romantic love theme for the two main protagonists, introduced by piano and the voice of Nora Orlandi in Tr.2, and then reprised by the orchestra in Tr.10, Tr.14, Tr.15, Tr.18, Tr.23 and in the conclusive version of the End Titles” (Tr.24). For this CD we have used the stereo master tapes of the original recording session preserved in very good condition in the RCA archives.