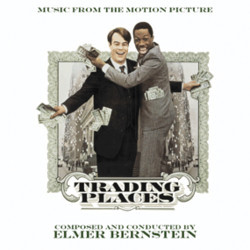 Presenting the world premiere release of the original motion picture score to the 1983 Paramount Pictures comedy classic TRADING PLACES, starring Dan Aykroyd, Eddie Murphy, Jamie Lee Curtis, Ralph Bellamy and Don Ameche, and directed by John Landis. Legendary composer Elmer Bernstein (THE GREAT ESCAPE, ANIMAL HOUSE, GHOSTBUSTERS, AIRPLANE) adapts Mozart’s “The Marriage of Figaro” and compliments it with his own original material to create an impeccably elegant score that provides pitch-perfect support for what is considered to be one of the great 80’s comedies - a social satire that is perhaps even more relevant now than it was upon its initial release. Produced by Dan Goldwasser and mastered by Mike Matessino from a 1/2 inch 3-track LCR source in the Paramount archives, this special release also features source music from the film as well as alternate cues. Jeff Bond provides in-depth liner notes that include new comments from director John Landis. This is a Limited Edition of 2000 Units.