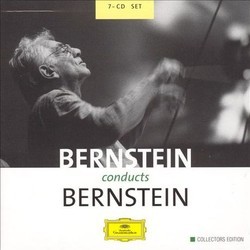 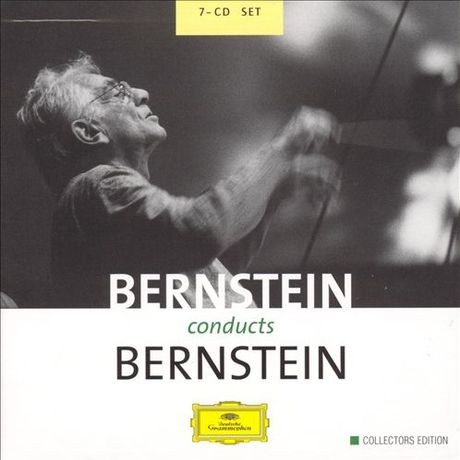 As orchestras struggle to reconnect with the vernacular musical experiences of their listeners, Deutsche Grammophon's hefty boxed set of Bernstein Conducts Bernstein couldn't be more timely. This box collects Bernstein performances from the 1970s and '80s, with a large group coming from his epochal 1977 concerts with the Israel Philharmonic in Berlin. This material has already been variously repackaged, but it's well worthwhile to have it all presented together. It's startling to realize, as you explore the seven-plus hours of music here, how well Bernstein as a composer anticipated today's trends. The rapprochement of a modern musical language with jazz and pop? From the very start, in the by-now-familiar Fancy Free. A determined embrace of the eclectic? Through his entire career, ranging from his rather Stravinskian treatment of symphonic jazz in the early days to later music in which serialist (and even aleatoric in the Concerto for Orchestra (Jubilee Games)) techniques coexist with traditional styles. The use of the symphony as a vehicle for the investigation of spiritual questions? Absolutely, in all three symphonies, in different ways. These performances were all more or less successful when originally released, and it has become a truism that Bernstein was the best interpreter of his own works. From the evidence here one might argue that in the rather personal symphonies no other conductor can match Bernstein, who here avoided the excesses of his Mahler interpretations even as he took up kindred metaphysical issues. And when it came to the sexy, meaty appeal of the Symphonic Dances From West Side Story (1957), nobody else can touch Bernstein's versions. But now one can find room for other interpretations of such works as the Orff-like Chichester Psalms. The price, for seven discs, is right, and the remastered CD sound is more than adequate.