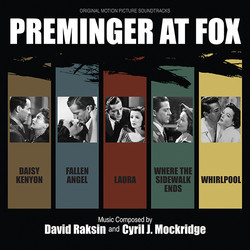 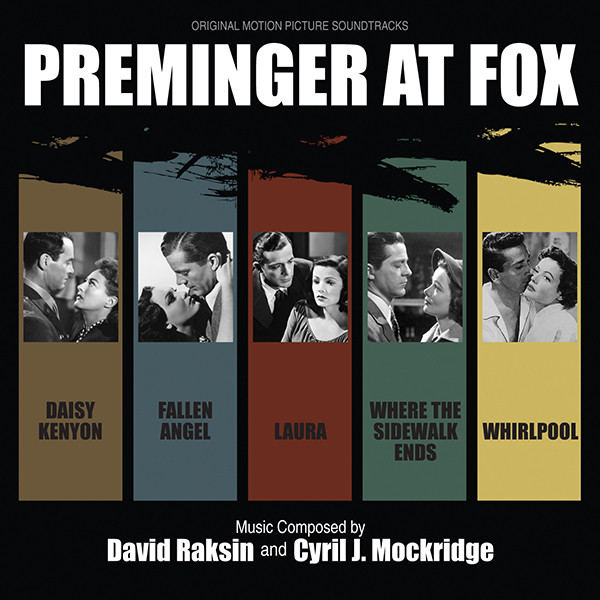 Whirlpool (1949)
Kritzerland is very proud to present a 2-CD set at a 1-CD price – five incredible scores on two CDs, four of them world premiere releases:

Including FALLEN ANGEL, WHERE THE SIDEWALK ENDS, LAURA, DAISY KENYON and WHIRLPOOL

For Preminger at Fox, we concentrate on five films, all of which were released on DVD under the Fox Film Noir umbrella. While one could argue about the use of the word noir in one instance, all five films have the look and feel of noir, they’re all very much of a piece and they’re all brilliantly directed by Otto Preminger.

Fallen Angel has all the classic noir ingredients – a down-at-the-heels drifter, a sultry siren that men will do anything for, an innocent nice girl, a tough cop, and various other archetypes. As he had with Laura, composer David Raksin provided another classic noir tune, this one called “Slowly,” which plays as source music throughout the film (and is sung by both Alice Faye and Dick Haymes). Additionally, Raksin provides his usual expert background score, beginning with a nervous, bustling, and exciting main title and continuing through a series of wonderful cues. There’s nothing quite like Raksin in noir mode and Fallen Angel is a Raksin classic.

Where the Sidewalk Ends reunited the stars of Preminger’s Laura – Dana Andrews and Gene Tierney. The composer for Where the Sidewalk Ends wasn’t Preminger regular David Raksin, but a Fox staff composer named Cyril J. Mockridge, with whom Preminger had worked before. Mockridge based his score around Alfred Newman’s classic “Street Scene” music – a piece that was used regularly in films of all types at Fox during that era. But what Mockridge does with it is great, and his own original music, of which there is plenty, suits the film perfectly.

No Preminger at Fox collection would be complete without the film that started it all – Laura, Preminger’s 1944 classic. For this CD, we include “The Laura Suite – Theme and Variations.”

Daisy Kenyon (1947), is a drama with a romantic triangle at its center, involving Joan Crawford, Dana Andrews, and Henry Fonda. It’s a terrific drama, filled with Preminger’s directorial touches that elevate it from being just another potboiler. Once again, the composer is David Raksin. Although the film has almost no music, the little that’s there is wonderful.

Whirlpool (1949), has a cast that includes Gene Tierney, Richard Conte, Jose Ferrer, and Charles Bickford. Once again a Preminger film features a classic David Raksin score, this one filled to the brim with one great cue after another beginning with its dramatic and then beguiling main theme. For this film, Raksin is at his most atmospheric and it’s one of his best scores and the longest score in this set.

Five great films by one great director for a great studio – four with scores by David Raksin and one with a gem of a score by Cyril J. Mockridge, all of which adds up to some great Golden Age film score listening.

PREMINGER AT FOX is limited to 1000 copies only