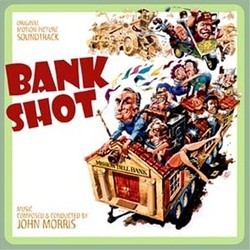 NOBODY MESSES WITH BULLDOG STREIGER!

Kritzerland is proud to another limited edition soundtrack, the world premiere release of Bank Shot , music composed and conducted by John Morris.

Bank Shot, adapted from the comic caper novel by Donald E. Westlake, starred George C. Scott as incorrigible criminal Walter Upjohn Ballentine, who, with his motley crew, decide to pull a big bank shot by abducting a bank  literally moving it from one location to another (the bank is being temporarily housed in a motor home). The film, directed by the great director/choreographer, Gower Champion, was not a success  it was poorly reviewed and disappeared from movie screens instantly, lost amidst a rather incredible year of film releases  1974 turned out to be one of Hollywoods all-time best, with such films as The Godfather II, Chinatown, Lenny, Alice Doesnt Live Here Anymore, The Towering Inferno, Blazing Saddles, Young Frankenstein, The Conversation, Murder On The Orient Express, well, you get the idea. With films like those, audiences simply werent interested in a farcical, over-the-top, manic comic caper film. Watching it now is a somewhat different experience, and the film actually has a lot of fun and funny moments, and is quite entertaining.

The score to Bank Shot was written by the great John Morris, composer of such great film scores as The Producers, Young Frankenstein, Blazing Saddles, Silent Movie, High Anxiety (all Mel Brooks films), David Lynchs The Elephant Man, Clue, The In-Laws, and many others. Choosing a very circus-like stylistic approach to the film (which itself is like a three-ring circus), Morris themes are delightfully melodic and fun, and perfectly suited the film. Much of his score, however, was truncated, moved around, or dialed so low in the mix that it may as well not have been there at all. But hearing it as it was recorded, and all in film order, its a wonderful listening experience, a score that simply makes you smile, and which, on occasion, sounds like a big Gower Champion production number.

For this world premiere release of Bank Shot, weve gone from the original three-track session masters and weve included every note of music Morris wrote for the film, as well as two alternate versions of the main title music. The cover illustration is by the great Jack Davis.

So, join Walter Upjohn Ballentine and his merry troupe of inept cohorts for the Bank Shot of a lifetime, all set to the merry music of the masterful John Morris.