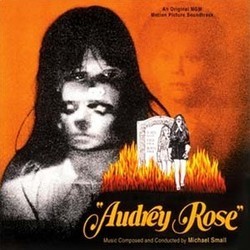 The problem was The Exorcist. In trying to sell the 1977 film Audrey Rose, the posters for the film made it look like it was going to be yet another ripoff of William FriedkinÆs shocking and terrifying 1973 film. But the fact is, Audrey Rose has nothing whatsoever to do with The Exorcist. It is, in fact, about as far removed from that kind of visceral terror as you can get. Based on the 1975 novel by Frank De Felitta (who also wrote the screenplay), Audrey Rose is not about possession by a demon of any sort û it is about reincarnation. Director Robert Wise was certainly no stranger to making atmospheric films of this nature, starting at the beginning of his career when he worked with the master of understated terror, Val Lewton, directing The Curse of the Cat People and The Body Snatcher. Years later, he would direct the brilliant horror film The Haunting, which was very much in the Lewton style. Wise also had an uncanny ability to pick the perfect composers for his projects, and a major part of the filmÆs atmosphere is its musical score by the gifted Michael Small.

Born in 1939, Small began scoring films in the late 1960s, but it was his masterful score to the 1971 Alan Pakula film Klute that announced him as a unique voice in film scoring. From that point on, he was a familiar name, providing some of the best scores for some of the best films of the 1970s, including The Parallax View, The Stepford Wives, Night Moves, The Drowning Pool, Marathon Man, The Driver, Comes A Horseman, The China Syndrome û there was no mistaking a Michael Small score, you knew it was his instantly, the minute the music began playing. He went on to score many other films, such as Going In Style, The Postman Always Rings Twice, Rollover, The Star Chamber, Target, Dream Lover, Jaws: The Revenge, as well as working in television.

SmallÆs score for Audrey Rose is one of his best. It is filled with his unique music, emphasizing character and drama and never playing for cheap effects. It is at times haunting, at times lyrical, at times downright creepy and scary, but always in service of the story and the characters. Right from the get-go, with his engaging and beautiful main title, right through to the filmÆs somewhat downbeat ending, SmallÆs music is simply and unerringly right.

The source material for Audrey Rose consisted of only two reels of tape in the MGM vaults. These mono tapes, made from the music stem (which means the volume shifts up and down repeatedly, as it does in the film), were in good shape for what they were. While it is not always easy to master from an up and down source, our mastering engineer, James Nelson, working his usual magic, got it to sound as good as it probably can. The result is that we finally have one of Michael SmallÆs best scores on CD.