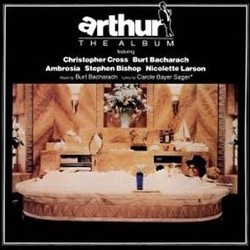 First time released on CD. Includes digital remastering, updated liner notes, memorababilia and original graphics. The music from the movie ARTHUR was some of the finest ever developed for a soundtrack, as ARTHUR-The Album shot to the upper rungs of the charts thanks to Burt Bacharach's amazing score and the #1 single Arthur's Theme (Best That You Can Do) by superstar Christopher Cross. The tune further went on to receive the Academy Award and Golden Globe awards. The most amazing thing about this album is that it has been out of print for years, and it has never been available on compact disc, that is until now! Friday Music is proud to present ARTHUR-The Album once again, remastered impeccably by Joe Reagoso (Doobie Brothers, Christopher Cross, America, Boz Scaggs) from the original Warner Music source tapes. Complete with new liner notes, original graphics, and oh yes, the music from more A+ artists like Ambrosia, Nicolette Larson and Stephen Bishop. So, if you loved the movie, now you can love ARTHUR-The Album. THE SOUNDTRACK RE-ISSUE OF THE YEAR!