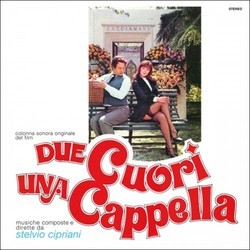 First appearance on CD of one of the most beloved works of Stelvio Cipriani. It is also a key score in his career, being together with Anonimo Veneziano and Dedicato a una Stella a kind of romantic trilogy dominated by a monothematic melody presented in many different variations.

The delicious comedy score of Stelvio Cipriani, one of his best, was released in 1975 in a DeLuxe LP by Cinevox label, including 30 minutes of music, with a selection of 15 tracks. Despite the popularity of the score, the album was soon out-of-print due to the failure of the film in commercial theaters, and the LP value has reached very high prices in the second market. This release includes all the music written and recorded by Cipriani for the film, a total of 73 minutes of music, all of them carefully restored and mastered by Claudio Fuiano.

The package includes a 12-page full color booklet, with liner notes by Gergely Hubay, who discusses the film, the composer and the score.