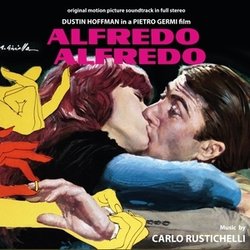 After already exploring the musical side of the films by Pietro Germi and the complete OSTs by Carlo Rustichelli for the films Seduced and Abandoned (Sedotta e abbandonata), Divorce Italian Style (Divorzio allitaliana) and The Birds, The Bees, and The Italians (Signore e Signori), it is now Alfredo, Alfredos turn. At the time, CAM had released an LP in Italy (CAM SAG 9044) and in Japan (Seven Seas FML 104) with 20 tracks for a total of 30 min. and 44 sec. Then in 1993 it was released for the first time on CD (CSE 107) with extra tracks (39:28 min. total), but with the sound filtered in Dolby Surround (something not appreciated by collectors). For our CD (51:54 minutes) we used the stereo master tapes from the original album (without Dolby) and we discovered around 21 extra minutes of material.